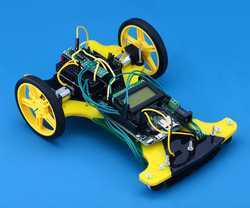 Like other developers and engineers here, I made a robot for the LVBots Line Following Contest. This post describes my robot, Usain Volt 2.0, and details some of what I was thinking when I designed it. If you want to know more about the competition rules and how it was judged, see the LVBots line following rules. Continued… 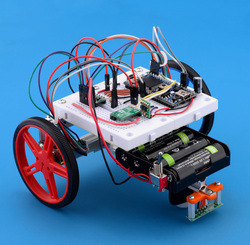 Several people here made robots to compete in the recent LVBots line following competition. The goal of the competition is to make an autonomous robot that follows a line on the ground as fast as possible. I made a robot called LearnBot for the competition. LearnBot is able to learn the line course on the first lap and then use that information to its advantage on the second and third laps. Continued…

A customer of ours who is a software engineer in Seattle made this detailed video showing how to assemble the new Zumo 32U4 robot kit. Thanks for sharing it with us, Jamie!

This Instructable by Annikken shows how to turn a Zumo Robot for Arduino into a smartphone-controlled tank. It uses the Annikken Andee for Android (they have one for iOS too), which is an Arduino shield that is connected between the Arduino and the Zumo.

Here is a video with the tank driving around:

More details are available on the Instructable page.

Forum user Bob Day shared his GPS puzzle box, which uses an A-Star 32U4 Micro, USGlobalSat EM-506 GPS Receiver, servo, and LCD to open a box only at a specific location. It also uses our S7V8F5 step-up/step-down regulator to provide power the A-Star and GPS module. In his post, Bob says that he got the idea from Mikal Hart’s “Reverse Geocache Puzzle Box”, which you can see in action in this video.

Pictures, connections, and the code used for the box can be found in Bob’s forum post.

Bohlebots, a team of students in Germany, won the West Germany Robocup soccer 1vs1 open league for a second time. They sent us an email that shows how their robot uses three omni wheels spaced evenly about its round chassis, which allows their robot to move in any direction. The omni wheels are actuated by some of our 9.7:1 25D HP metal gearmotors, which are each controlled using one of our VNH5019 motor driver carriers.

Check out this highlight video of their robot in the competition:

Good job, everybody, and good luck!

Jonathan Spitz made a fun robot he calls Charlie, the cricket. In his LinkedIn post, Jonathan explains that Charlie uses four motors. Two of the motors are used for walking and the other two are used for sprawling. The four motors are controlled by two Baby Orangutans, which also handle the closed-loop feedback from encoders to free up processing on the Arduino Micro.

Charlie’s novel propulsion system of spinning legs that can be tilted was inspired by one of Jonathan’s colleagues. They allow Charlie to traverse difficult terrain as shown in this video:

Charlie is a follow-up design on an earlier robot Jonathan made named Billy, the blue beetle, which was larger and lacked the ability to sprawl. Charlie also was designed to have the ability to drive on its back, which is something Billy could not do. You can read about Jonathan Spitz’s experiences with Billy in his LinkedIn post.

Thomas Schoch, who previously built the PiBot-B we blogged about, built another robot with a Raspberry Pi. His robot, the PiBot-A, uses our DRV8835 Dual Motor Driver Kit for Raspberry Pi B+ with a Raspberry Pi Model A+ to control two 100:1 Micro Metal Gearmotors. The robot also uses our S7V7F5 Switching Step-Up/Step-Down Regulator to supply the Raspberry Pi with 5 V from the motor power supply, allowing the whole robot to be powered form a single source.

The PiBot-A is controlled by a Web-App from Thomas’s iPhone. It communicates over WiFi to the Raspberry Pi, which is running lighttpd and PHP. The Python program on the PiBot-A uses the WiringPi library to send signals to the motor driver kit to drive two 100:1 Micro Metal Gearmotors that are connected to the chassis with our Micro Metal Gearmotor Brackets. Thomas also added an array of Sharp digital distance sensors to give the robot obstacle detection. You can find a video of the PiBot-A avoiding boxes below:

For a complete write-up of the robot, check out the PiBot-A page. It is written in German, but it has a link at the top to translate it into English using Google Translate.

11 February 2015 update: Thomas added support for our QTR-3A Reflectance Sensor Array to his PiBot-A to make a line follower and posted about it on Let’s Make Robots. The sensor array is interchangeable with the array of Sharp digital sensors used for obstacle detection. You can find a video of his robot following a line below:

One of our customers, Gary, made a heater box and ventilation system for a custom car and posted about it on our forum. His system uses several servos controlled by one of our Micro Serial Servo Controllers. The servos actuate the different valves in his air system to allow him to control the air source as well as things like the defog/defrost system.

Gary chose to use our board because it allowed him to stop sending signals to the servos when they are not moving. For others considering using our Micro Serial Servo Controller in their next project, we recommend using our Maestro servo controllers instead. They have the ability to stop sending signals to the servos like the Micro Serial Servo Controller and are newer and better in almost every way.

You can find more pictures and read more about Gary’s heater box and ventilation system in his post on our forum.

DeWitt Godfrey, a sculptor and professor at Colgate University, used our custom laser cutting service to create a 15% scale polystyrene prototype model before moving on to the final full-sized sculpture. The final installation, located on the Colgate campus, measures approximately 40′ × 20′ and weighs 13 tons. In the video above, the styrene model appears at 2:10, and again at 2:40. You can also see a time-lapse video of the sculpture’s installation here.