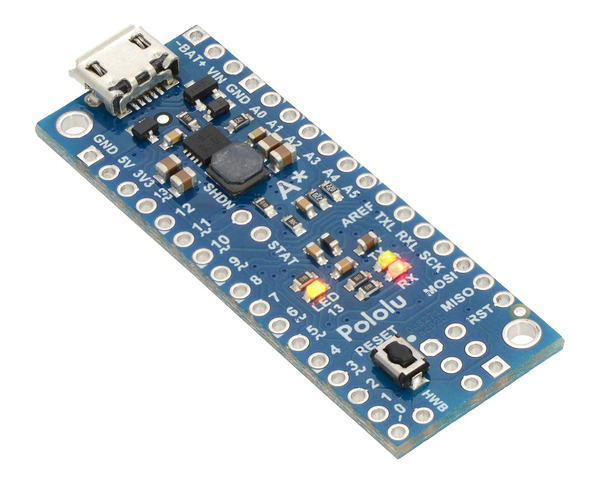 The A-Star 32U4 Mini LV is a programmable module based on the ATmega32U4 from Microchip (formerly Atmel). Unlike competing products, it has an on-board switching step-up/step-down regulator that allows it to be powered efficiently from a 2.7 V to 11.8 V supply. This compact 1.9″ × 0.7″ board breaks out all 26 of the microcontroller’s I/O pins (of which 7 can be used as PWM outputs and 12 as analog inputs), and loading programs is made easier by a Micro-USB interface and a preloaded Arduino-compatible bootloader.

This version, the A-Star Mini LV, can be powered from a 2.7 V to 11.8 V external source. The input voltage is regulated to 5 V by a TPS63061 switching step-up/step-down (buck-boost) converter from Texas Instruments. (We also make a standalone regulator based on this integrated circuit.)

The regulator’s flexibility in input voltage is especially well-suited for battery-powered applications in which the battery voltage begins above 5 V and drops below 5 V as the battery discharges. Without the typical restriction on the battery voltage staying above 5 V throughout its life, a wider range of battery types can be considered. For example:

As shown in the left graph below, the LV’s switching regulator has an efficiency – defined as (Power out)/(Power in) – of 80% to 90% for most combinations of input voltage and load.

The A-Star’s components, including the microcontroller and LEDs, draw 30 mA to 40 mA in typical applications. The rest of the regulator’s achievable output current, which depends on input voltage as well as ambient conditions, can be used to power other devices. The right graph above shows output currents at which the voltage regulator’s over-temperature protection typically kicks in after a few seconds. These currents represent the limit of the regulator’s capability and cannot be sustained for long periods; under typical operating conditions, a safe limit for the maximum continuous regulator output current is 60% to 70% of the values shown in the graph.