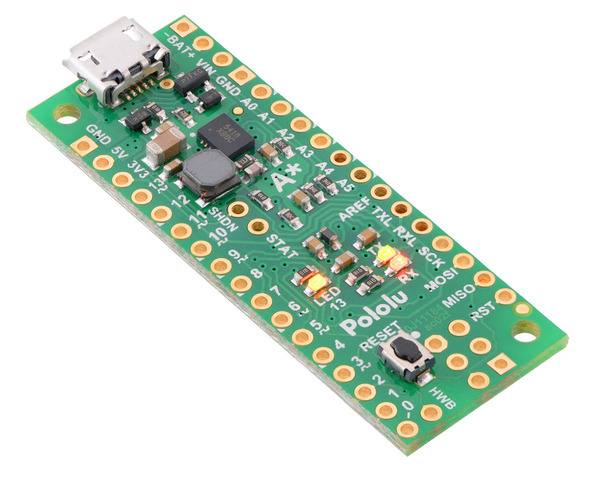 The A-Star 32U4 Mini SV is a programmable module based on the ATmega32U4 from Microchip (formerly Atmel). Unlike competing products, it has an on-board switching step-down regulator that allows it to be powered efficiently from a 5 V to 40 V supply. This compact 1.9″ × 0.7″ board breaks out all 26 of the microcontroller’s I/O pins (of which 7 can be used as PWM outputs and 12 as analog inputs), and loading programs is made easier by a Micro-USB interface and a preloaded Arduino-compatible bootloader.

This version, the A-Star Mini SV, can be powered from a 5 V to 40 V external source. The input voltage is regulated to 5 V by an 800 mA ISL85418 switching step-down (buck) converter from Renesas (which acquired Intersil). (We also make standalone regulators based on the 500 mA and 1 A versions of this integrated circuit.)

As shown in the left graph below, the SV’s switching regulator has an efficiency – defined as (Power out)/(Power in) – of 80% to 95% for most combinations of input voltage and load.

This newer version (ac02f) of the A-Star 32U4 Mini SV replaces the original version (ac02c). The new version uses an improved 5 V regulator that can deliver more current (800 mA vs 500 mA) and operates to 40 V instead of 36 V. The easiest way to distinguish between the two versions is via the silkscreen on the side of the board opposite the USB connector, where the original version is labeled ac02c and the new version is labeled ac02f. The new version also uses an ENIG finish, so the plating on the exposed copper looks gold, and it has unplated mounting holes.