Pablo Lewin wanted a way to adjust the antenna for his Ham radio remotely, but was told his antenna controller was too old to upgrade for remote operation. That didn’t deter him though! He got creative and came up with a solution by connecting a stepper motor to his antenna controller and then using one of our Tic Stepper Motor Controllers. Now he can access the computer the Tic is connected to remotely and control the antenna’s position through the Tic’s software. Check out the video below to see his setup:

Here’s the video Pablo recommends at the beginning of his explanation to get up and running with your own Tic Stepper Motor Controller:

We are having an Independence Day sale from now through Monday, July 8! Check out the sale page for more information. Please note that we will be closed Thursday, July 4, so orders placed after 2 PM Pacific Time Wednesday, July 3 will be shipped on Friday, July 5.

We have expanded our selection of specially modified FEETECH servos that have direct access to the feedback potentiometer through an extra fourth (green) wire! Several months ago, we started carrying similarly modified micro FS90-FB and standard-sized FS5103B-FB servos. Now, our larger selection includes a variety of sizes from compact sub-micro servos all the way up to ultra-high torque giant servos:

The feedback voltage, which varies linearly over the servo’s range of motion by a couple of volts, is especially useful for more complex robotic applications that require monitoring the actual servo position. For example, it can be used for determining if the servo is stalled or when it has reached it’s target position. It also allows you to implement your own higher-level closed-loop position control or create servo movements by hand that you can record and play back later.

We have released firmware version 1.04 for the Micro Maestro 6-Channel USB Servo Controller.

This bug has been present since we first released the Micro Maestro almost 10 years ago in November of 2009, but its effects tend to be subtle, and we only learned about it a few weeks ago when a customer brought it to our attention.

This bug does not affect the 12-channel, 18-channel, and 24-channel Mini Maestros, so there is no corresponding update for them. The latest Mini Maestro firmware version is still 1.03.

For information about how to upgrade your 6-channel Micro Maestro, see the “Upgrading Firmware” section of the Maestro user’s guide.

We are now offering replacement tires for our 32×7mm wheels and for our 40×7mm wheels. These are intended primarily as replacement parts for our wheels, but they can also be used as nicer tires for other similarly sized wheels.

Along with the tires we released last month for our larger Pololu wheels, we now have replacement tires available in four sizes that can stretch to work with six different sizes of Pololu wheels:

We now have published performance graphs (1MB pdf) for our 20D Metal Gearmotors! Each chart is based on hundreds of individual measurements that reveal how the speed, current, power, and efficiency of that particular gearmotor version depend on the applied load (i.e. torque). Our test methodology is the same as the one we used to make our Micro Metal Gearmotor performance graphs, so you can see our blog post about that for more information.

If you have any questions or feedback about these graphs or if there is additional information you would like to see available for our motors, please feel free to contact us (or just leave a comment below). And if you are wondering about graphs for our larger gearmotors, don’t worry, those are coming! (If you need something before those datasheets are done, just let us know and we might be able to get you preliminary data for a particular gearmotor.) 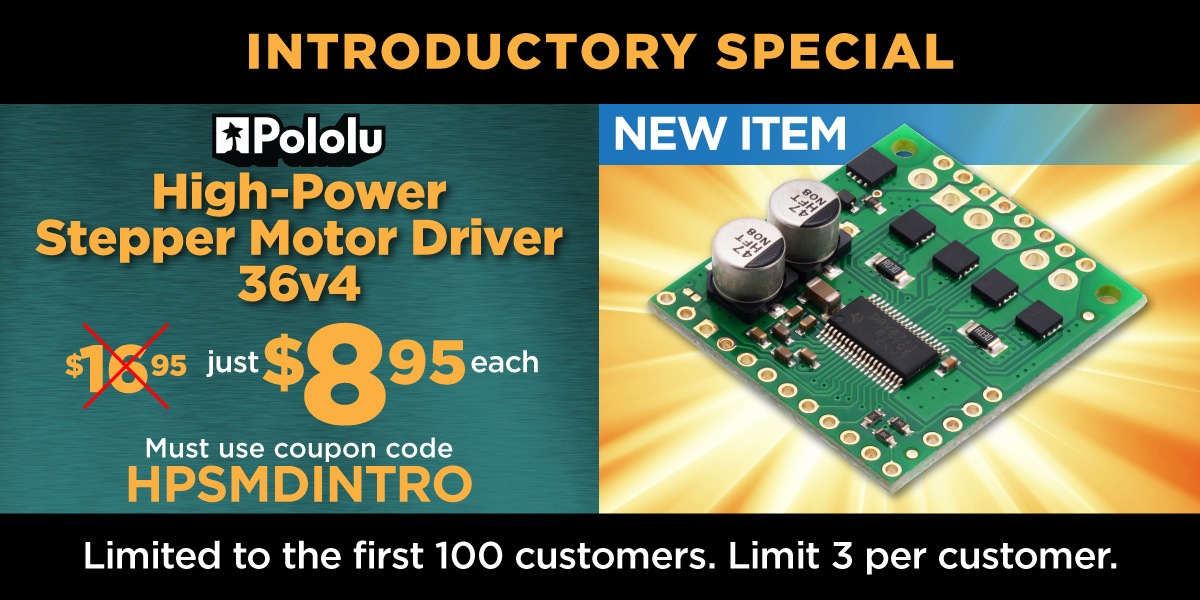 I am very excited to announce the release of our new High-Power Stepper Motor Driver 36v4, our most powerful stepper motor driver yet, with more than twice the current capabilities of any of our alternative drivers. This driver can deliver a continuous 4 A per phase without any heat sinks or active cooling, and up to 6 A with cooling! This means we finally have a driver capable of powering our largest stepper motors like this beefy motor with a 2.8 A current rating.

This new driver also has a wide 8 V to 50 V operating range, making it great for use in 12, 24, or 36 V systems. And though you might be thinking that your stepper motor’s voltage rating is well below that max voltage so what do you care, keep in mind that running you stepper motor at a higher voltage while actively limiting the current (as you can do with all our stepper motor drivers) allows you to achieve higher step rates than you could using the rated voltage.

Other exciting features of this driver include nine different step resolutions down to 256 microsteps, STALL and BEMF (back EMF) outputs that enable more advanced control algorithms, and highly adjustable decay parameters and modes for creating ultra-smooth motion profiles. The driver is configurable through its SPI interface, and our Arduino library and example sketches can help you get started.

As usual, we are offering an extra introductory special discount on the High-Power Stepper Motor Driver 36v4 to help share in our celebration of releasing a new product. The first hundred customers to use coupon code HPSMDINTRO can get up to three units for just $8.95 each!

For the second year in a row, Team Hitchin Hackspace and their robot, Tito-Stretch, placed 4th overall in the Pi Wars! They did this at the Advanced/Pro level, which is Pi Wars’ most challenging competition category. (In case you haven’t heard already: Pi Wars is an international robotics competition that focuses on Raspberry Pi-controlled robots.) The video above features Tito-stretch high-tailing it through the obstacle course event. The team’s speedy performance allowed them to climb to the very top of their division, which is a step above their 2nd place finish in 2018’s obstacle course event.

Tito-Stretch is the latest iteration of the hackspace’s competition robot, which has evolved in name and form over the last few years. As we understand it, the team named the original version of their robot Twenty Two Over Seven (22/7 is one way to approximate pi), abbreviated that to TTOS, and then affectionately transitioned to calling the robot “Tito”. Later, the team lengthened their robot and accordingly appended “-⁠Stretch” to the name.

The Tito-Stretch chassis is a 3D-printed design that uses a pair of skateboard bearings in a way that decouples the front and rear parts of the chassis, allowing each part to roll independent of the other. This passive articulation allows the robot to more consistently maintain all four wheels as solid points of contact on uneven terrain. When assembled, the chassis parts clamp down onto four 12V 25D mm gearmotors, and a VNH5019 motor driver controls each motor. A 5V regulator steps down the voltage of a 3S LiPo and powers a Raspberry Pi 3 Model A+, which is the brain of the operation. The team can remotely control their robot with Bluetooth controllers (they currently use a PS4 controller, but have used other devices in the past), and various accessories like a few VL53L0X time of flight distance sensors help enable autonomous navigation. You can find code for Tito-Stretch, and older versions of Hitchin Hackspace’s Pi Wars robots, on their GitHub page.

Great job on your competition this year, Hitchin Hackspace! We hope to hear more about your robots in the future! 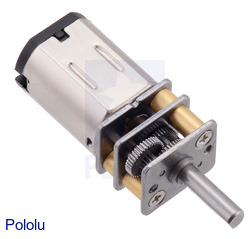 Our Micro Metal Gearmotors are now available with 380:1 gearboxes, offering a new high gear ratio option between our existing 298:1 and 1000:1 versions. Unlike the 1000:1 gearmotors, which uniquely require a longer, more expensive gearbox to achieve such a big reduction, the 380:1 gearboxes fit everything in the same volume as all our lower gear ratios, so they are the same price as those lower-ratio versions and they work with all our micro metal gearmotor brackets.

What really sets these new units apart from our other gear ratios are their stainless steel gearbox plates, which are more durable than the ubiquitous brass ones, especially in applications with non-negligible radial loads. They also look way cooler! Continued…