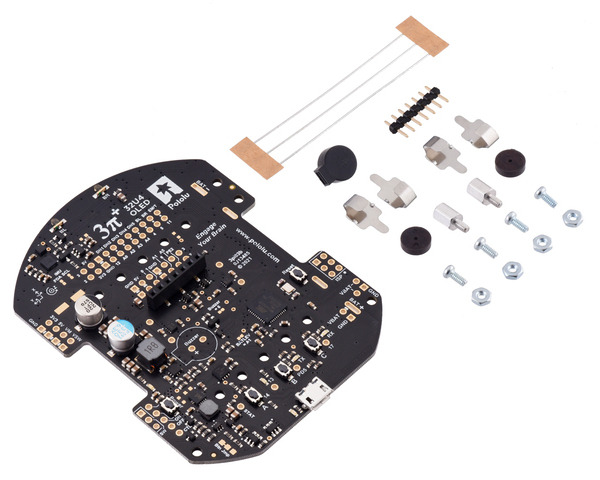 This is the control board for the 3pi+ 32U4 OLED robot, and it is included as part of the Standard Edition, Turtle Edition, and Hyper Edition 3pi+ 32U4 OLED kits and robots. It can be used as a replacement part for those products, or it can be assembled with the 3pi+ Chassis Kit and a pair of 6V Micro Metal Gearmotors with extended motor shafts to create a “custom edition” 3pi+ 32U4 OLED robot.

Compare all products in 3pi+ 32U4 OLED Robot.

This control board is already included as part of the following 3pi+ 32U4 OLED assembled robots and kits:

The 3pi+ 32U4 OLED Control Board ships with all of its surface-mount components populated, and it includes the following through-hole parts and mounting hardware:

Please note that assembly (including soldering) is required; see the user’s guide for assembly instructions.

To build a robot with the 3pi+ 32U4 OLED Control Board, you will need a few additional parts:

You might also consider getting these for your 3pi+ 32U4 OLED robot:

The original version of the 3pi+ 32U4 includes an 8×2 character LCD, while the newer 3pi+ 32U4 OLED (which uses this control board) incorporates a graphical OLED display instead. The name “3pi+ 32U4” can generally be used to refer to both the original (LCD) and OLED versions, and the documentation in our updated user’s guide covers both versions.