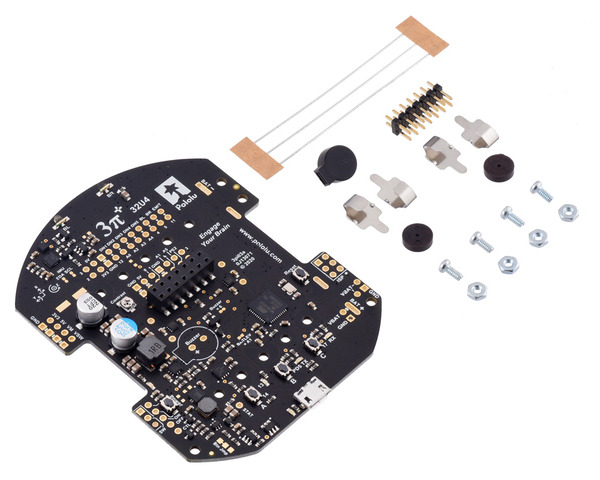 This is the control board for the 3pi+ 32U4 robot, and it is included as part of the Standard Edition, Turtle Edition, and Hyper Edition 3pi+ 32U4 kits and robots. It can be used as a replacement part for those products, or it can be assembled with the 3pi+ Chassis Kit and a pair of 6V Micro Metal Gearmotors with extended motor shafts to create a “custom edition” 3pi+ 32U4 robot.

Compare all products in Original 3pi+ 32U4 Robot.

New version available! We have released an updated 3pi+ 32U4 OLED Robot that includes an OLED display with better graphical capabilities than the LCD used by this original 3pi+ 32U4 robot. The 3pi+ 32U4 OLED Control Board can be used as a replacement part for a 3pi+ 32U4 OLED robot, and we recommend using the newer OLED version for new custom robot builds. This original version of the control board will only be available by special order once our existing stock runs out.

The 3pi+ 32U4 Control Board is designed to be assembled with a 3pi+ Chassis Kit and a pair of 6V Micro Metal Gearmotors with extended motor shafts to create a 3pi+ 32U4 robot. This product is primarily intended as a replacement product for the 3pi+ 32U4 robots and kits that already include it or for those who want to build a 3pi+ 32U4 robot with different gearmotor versions than the ones offered with those complete kits and assembled robots.

This control board is already included as part of the following 3pi+ 32U4 assembled robots and kits:

This is the control board for the original 3pi+ 32U4 Robot with an LCD. The newer 3pi+ 32U4 OLED Control Board is designed to work with an graphical OLED display.

The 3pi+ 32U4 Control Board ships with all of its surface-mount components populated, and it includes the following through-hole parts and mounting hardware:

Please note that assembly (including soldering) is required; see the user’s guide for assembly instructions.

To build a robot with the 3pi+ 32U4 Control Board, you will need a few additional parts:

You might also consider getting these for your 3pi+ 32U4 robot:

The original version of the 3pi+ 32U4 (which uses this control board) includes an 8×2 character LCD, while the newer 3pi+ 32U4 OLED incorporates a graphical OLED display instead. The name “3pi+ 32U4” can generally be used to refer to both the original (LCD) and OLED versions, and the documentation in our updated user’s guide covers both versions.