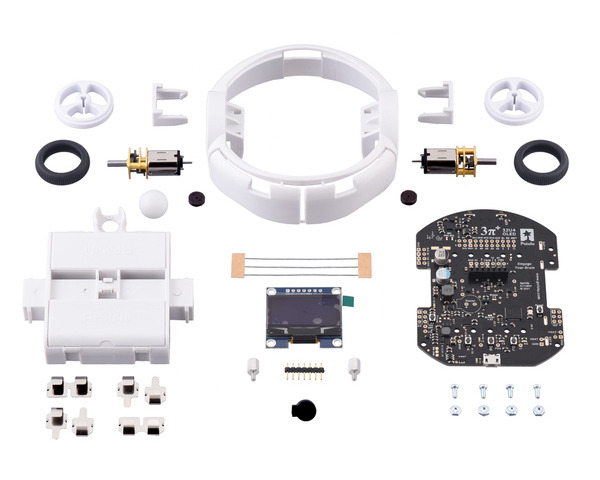 The Pololu 3pi+ 32U4 OLED robot is a complete, high-performance mobile platform based on the Arduino-compatible ATmega32U4 MCU, and this kit contains all the parts you need to build the Standard Edition version, including a pair of 30:1 MP 6V Micro Metal Gearmotors. The many features of the 3pi+ include dual quadrature encoders for closed-loop speed or position control, line sensors, front bump sensors, a full IMU (3-axis accelerometer, magnetometer, and gyro), and a graphical OLED display, all packed into a robot that can fit within the palm of your hand. This product is a kit; assembly (including soldering) is required.

This product is the kit version of the Standard Edition 3pi+ 32U4 OLED Robot. Assembly (including soldering) is required.

This is a newer 3pi+ 32U4 OLED Robot Kit with a graphical OLED display. For its original version counterpart with an LCD, see the 3pi+ 32U4 Robot Kit with 30:1 MP Motors (Standard Edition Kit).