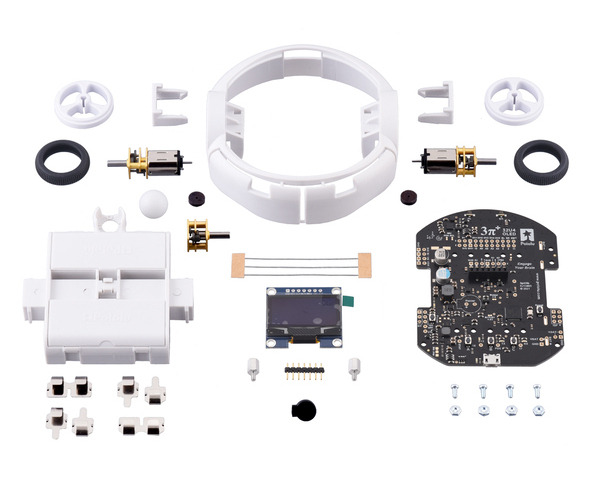 The Pololu 3pi+ 32U4 OLED robot is a complete, high-performance mobile platform based on the Arduino-compatible ATmega32U4 MCU, and this kit contains all the parts you need to build the Hyper Edition version, including a pair of 15:1 HPCB 6V Micro Metal Gearmotors. This product is a kit; assembly (including soldering) is required.

This product is the kit version of the Hyper Edition 3pi+ 32U4 OLED Robot. Assembly (including soldering) is required. This version is very difficult to control and fast enough to damage itself from impacts, so it is only recommended for advanced users. We strongly recommend keeping motor speeds below 50% on this version. A spare gearbox is included with this edition and instructions for installing it can be found here.

This is a newer 3pi+ 32U4 OLED Robot Kit with a graphical OLED display. For its original version counterpart with an LCD, see the 3pi+ 32U4 Robot Kit with 15:1 HPCB Motors (Hyper Edition Kit).