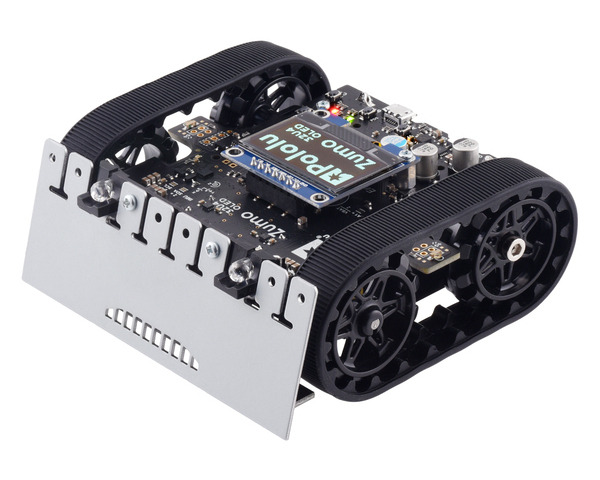 The Pololu Zumo 32U4 OLED robot is a versatile tracked robot based on the Arduino-compatible ATmega32U4 MCU. It includes two 100:1 HP micro metal gearmotors along with integrated dual motor drivers, a graphical OLED display, quadrature encoders, line sensors, side and front proximity sensors for detecting objects, and a full IMU for detecting impacts and tracking orientation. The low-profile robot is less than 10 cm × 10 cm—small enough to qualify for Mini Sumo. No soldering or assembly is required; just add 4 AA batteries and a USB cable and your Zumo is ready for programming.

This version of the Zumo 32U4 OLED robot (item #4993) ships fully assembled with a pair of 100:1 HP micro metal gearmotors (with extended motor shafts). As described above, two assembled versions are also available with lower gear ratios (so they are both faster but cannot deliver as much torque).

This is a newer Zumo 32U4 OLED Robot with a graphical OLED display. For its original version counterpart with an LCD, see the Zumo 32U4 Robot (Assembled with 100:1 HP Motors).