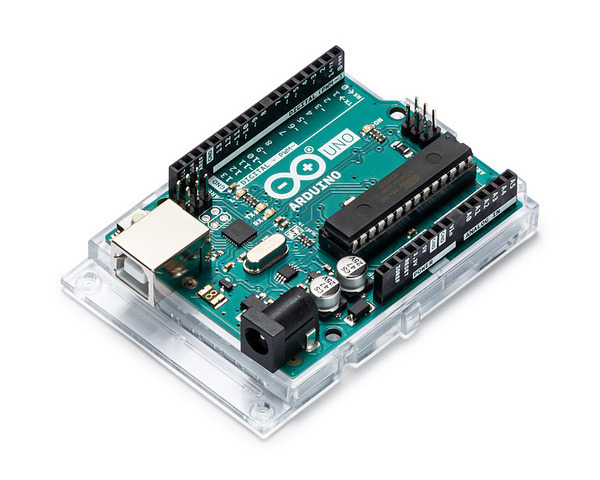 The Arduino Uno is a microcontroller board based on the ATmega328. It has 20 digital input/output pins (of which 6 can be used as PWM outputs and 6 can be used as analog inputs), a 16 MHz resonator, a USB connection, a power jack, an in-circuit system programming (ICSP) header, and a reset button. It contains everything needed to support the microcontroller; simply connect it to a computer with a USB cable or power it with a AC-to-DC adapter or battery to get started.

The Uno differs from all preceding boards in that it does not use the FTDI USB-to-serial driver chip. Instead, it features an ATmega16U2 programmed as a USB-to-serial converter. This auxiliary microcontroller has its own USB bootloader, which allows advanced users to reprogram it.

The Arduino has a large support community and an extensive set of support libraries and hardware add-on “shields” (e.g. you can easily make your Arduino wireless with our Wixel shield), making it a great introductory platform for embedded electronics. Note that we also offer a SparkFun Inventor’s Kit, which includes an Arduino Uno along with an assortment of components (e.g. breadboard, sensors, jumper wires, and LEDs) that make it possible to create a number of fun introductory projects.

This is the 3rd revision of the Uno (R3), which has a number of changes:

More information about the Arduino Uno R3 is available on Arduino’s website.

Warning: We recommend not connecting the Arduino to USB while it is powered through VIN. See this forum post for more information.

The table below compares the Arduino Uno, Leonardo, and our A-Star 32U4 Prime controllers. The A-Star Primes are based on the same ATmega32U4 AVR microcontroller as the Leonardo and ship with Arduino-compatible bootloaders. The Primes also offer many advantages, including superior power management that enables efficient operation from 2.7 V to 11.8 V (LV version) or 5 V to 36 V (SV version).

We also carry a variety of other programmable controllers, from the beginner-friendly BASIC Stamp to the far more capable mbed and Raspberry Pi boards, which are based on powerful ARM processors. Our full selection can be found in our Programmable Controllers category.