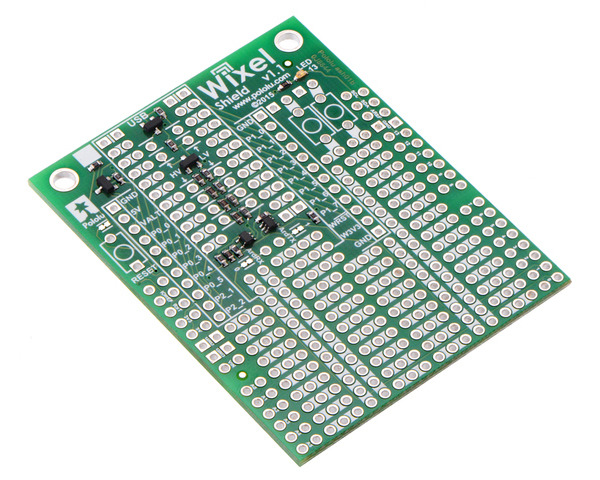 Unleash your Arduino! This shield allows you to interface Wixel wireless modules to your Arduino (and other compatible products), enabling simple wireless programming, debugging, and control using standard Arduino software. Wixel developers can also use this item as a Wixel prototyping board.

Compare all products in Wixels or

The Wixel shield seamlessly enables a wireless link (with a typical range of ~50 feet) to duplicate the functionality of your Arduino’s USB interface, which means you can use the standard Arduino computer software to:

This is version 1.1 (v1.1) of the Wixel Shield, which replaces the original Wixel Shield for Arduino. It adds pass-throughs for the four new pins (SCL, SDA, IOREF, and an unused pin) introduced on the Arduino Uno R3 and present on all newer Arduinos. (The original Wixel Shield was designed before the R3 was released.) The v1.1 shield also features improved level shifter circuits that convert between the voltage on the Arduino’s IOREF pin and the Wixel’s 3.3 V, allowing it to work automatically with 3.3 V and 5 V Arduino boards. Generally speaking, most users should not notice any other differences between the two shield versions; details can be found in this section of the user’s guide.

Wireless communication requires a pair of Wixels, which are sold separately or as part of a Wixel shield combination deal. An Arduino is not included.

Advanced users can write programs for their Wixels to make use of the its 12 free general-purpose I/O lines, including 5 analog inputs, or to develop more complex wireless communication networks.

The Wixel Shield’s wireless programming feature is not compatible with the Arduino Leonardo or the A-Star 32U4 Prime.