We are now carrying the FEETECH FS90 micro servo. At a weight of only 9 g and less than inch long, this servo is great for actuating tiny mechanisms. We also carry the continuous-rotation version of this servo, the FEETECH FS90R.

I am excited to announce the release of the Romi chassis, our new platform for mobile robotics. Romi is a 6.5″-diameter round chassis that includes all the basic mechanical parts that you need for a mobile robot: a base plate with integrated battery holder, motors and motor brackets, wheels with silicone tires, and a ball caster as a third point of contact.

The Romi chassis is designed to be extended. It includes numerous mounting holes and slots, including specific spots for Arduino and Raspberry Pi and a place in front for a second ball caster. The motors have extended shafts for use with Romi encoders in applications requiring precision. For power, you can choose between four and six AA cells; we recommend the Romi power distribution board for access to battery power.

As an example of what you can do, here is the chassis with a Raspberry Pi A+ and our A-Star Robot Controller mounted on top, with power, motors, and encoders all fully connected and operational:

The chassis is available in six different colors, and if you want to mix and match, you can head over to our Romi Chassis Components category and select the parts you want. 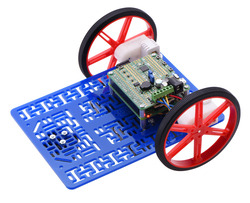 In this post I will show you how to build an expandable robot platform based on a Raspberry Pi and an A-Star 32U4 Robot Controller. With this platform, the powerful Raspberry Pi can take care of high-level tasks like motion planning, video processing, and network communication, while the A-Star, which mounts to the Pi’s GPIO header, takes care of actuator control, sensor inputs, and other low-level tasks that the Pi is incapable of. The total cost of the parts I used is about $120. Continued…

We will be closed tomorrow, November 26, for Thanksgiving. Also, since our huge Black Friday/Cyber Monday Sale is under way, our usual same-day shipping service will not apply until we catch up. Until then, we will be doing our best to ship your orders as quickly as possible!

Our mini MOSFET-based power switches now have a set of companion versions with larger MOSFETs:

As I mentioned when announcing the Mini switches in September, they have many advantages over our older pushbutton power switches, including a much larger input voltage range and reverse protection, but the current limits were lower. With the new big switches, we can now support applications well beyond what the older products could handle. We are offering two versions with different MOSFETS: the MP unit can handle about 8 A, and the HP version is good for about 16 A. Both operate over the same 4.5 V to 32 V range as the Mini SV switches.

Like the mini power switches, these big switches are available with our patented push-on/push-off latching circuit or with a simple slide switch:

For more information, see the links below or check out our power switch category.

I am excited to announce four new general-purpose MOSFET-based power switches. But why is Pololu making something as seemingly basic as power switches?

One of the most basic requirements for any electronics project is a way to turn the power on and off.

For a typical project assembled on a breadboard, your first approach might naturally be to plug in some breadboard-compatible switch like this:

This will work okay in many situations, but if you start connecting motors or other high-power components like a Raspberry Pi, you will quickly reach the 300 mA limit of that little switch and melt it or worse. So, assuming that the rest of your project survived, the next step might be to upgrade to a beefier switch:

I use this one on a lot of projects; it feels really solid and can do 5 A. But it is not breadboard compatible, it is kind of big (more than one inch long), and flipping it takes a lot of force, all of which means more wiring and mounting issues to deal with. And then your project ends up not looking particularly modern – can you imagine a smartphone with one of those sticking out the side? We expect everything these days to be controlled by a tiny pushbutton, with software power features like auto-shutoff. Even my new car does not have the traditional mechanical keyswitch: those are getting rapidly replaced by intelligent software-controlled pushbuttons.

With a modern power switch like the one on your phone, the pushbutton itself is only momentary and does not actually conduct the current that powers the device. Typically the button is just an input to a low-power microcontroller that activates MOSFETs as necessary to control power to the rest of the circuit. Programming a microcontroller is a fine approach to power management, but it is a difficult engineering challenge itself. What if you just want a component that does the job for you, like the switches pictured above? That’s where Pololu power switches come in.

Our power switches do MOSFET-based switching using simple electronic circuits; not having a built-in microcontroller means they are inexpensive and can work over a wide voltage range, for use in a variety of projects. Unlike many soft-power solutions, they are also designed to turn completely off – no current flows in the off state except whatever can leak through the transistors (around 10 nA or less).

We have been selling switches like these for a long time, both as discrete boards and incorporated into other products. As shown in the pictures above, we have two basic implementations:

The pushbutton version seems more modern and lends itself better to features like software shutoff, but using it on the 3pi demonstrates one potential disadvantage: if a 3pi crashes into something hard enough to rattle the batteries, the input voltage briefly drops to zero and turns off the switch, stopping the robot. You might consider this a feature, since it prevents further damage to an out-of-control robot. However, when we designed the Zumo, we knew that slamming into things would be standard practice, and a power shutdown in the middle of a sumo match could be disastrous. So our Zumo boards use the slide-switch method of power control.

Our older pushbutton power switches have long been in need of an upgrade, and now we have two new boards to replace them as well as two entirely new slide-switch versions. The boards have a greatly increased input voltage range: 2.2 V to 20 V on the LV versions or 4.5 V to 40 V on the SV versions, and there are a few other new features:

Note that the form factor is different and the current limits are lower than our older pushbutton power switches, so these are not drop-in replacements.

In summary, don’t be one of those people who has to plug and unplug wires to turn his project on and off. Take a look at the detailed specifications on product pages to select the right switch for your application!

We are now finally carrying a cable for the Sharp GP2Y0A51SK0F Analog Distance Sensor 2-15cm. The GP2Y0A51SK0F, our shortest-range analog distance sensor, has a compact package with a unique JST ZH-style connector, so this cable will not work with any of our other distance sensors. The cable is 12 inches (30 cm) long, with wires that you can cut and terminate as necessary for your project. 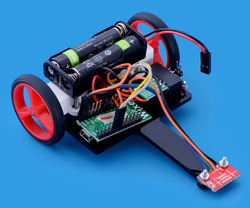 Two Point Four was my entry in the LVBots 2015 line following competition, originally built for our 2013 contest but significantly rebuilt since then. I designed it to be simple, low-power, and lightweight, starting with its 2×AAA, 2.4 V nominal power supply, from which it gets its name. Continued…

I am excited to announce our new A-Star 32U4 Robot Controller LV with Raspberry Pi Bridge, a general-purpose robot controller based on Atmel’s ATmega32U4 microcontroller.

This new robot controller is the latest model in our A-Star line of Arduino-compatible USB microcontroller boards. We started with the A-Star 32U4 Micro and have been gradually expanding the line, adding peripherals and various form-factor and voltage options, with the goal of eventually replacing our older Orangutan robot controllers. The Zumo 32U4 was a major step in that direction, since its controller board is essentially an A-Star 32U4 plus extra peripherals for motor control and sensing. But while the Zumo 32U4 is a complete robot kit, this board is for people who want to design their own robot.

The A-Star 32U4 Robot Controller LV includes most of the features of the A-Star 32U4 Prime LV, including an Arduino-compatible USB bootloader, an efficient step-up/step-down regulator, and handy peripherals like the buzzer and buttons, and it expands on the A-Star line by adding a pair of Texas Instruments DRV8838 1.8 A motor drivers, the same motor drivers as on the Zumo. All of the AVR’s GPIO lines are broken out, and we have included handy power and ground rails so you can easily connect lots of things like servos and sensors:

This board is well-suited for small robots that would have otherwise used an Orangutan controller like the SV-328 or SVP-1284. While we did not include an LCD like on the Orangutans, you can get far better display, monitoring, or data logging by making use of the Raspberry Pi connection, which I will talk about next.

Using the robot controller with a Raspberry Pi

The Raspberry Pi is a great board for an embedded project that needs serious computational power or connectivity. We have released a couple of Raspberry Pi motor driver boards over the past year, which give you a way to get started exploring robotics with your Raspberry Pi. But robotics projects tend to use a lot of analog sensors, timing-sensitive devices like servos, and other peripherals that are not compatible with the limited I/O capabilities of the Raspberry Pi. These types of things are what microcontrollers are designed for, so you can do a lot more if you pair your Raspberry Pi with a complete microcontroller board.

That’s why instead of using the standard Arduino form factor like the Prime, we built the A-Star 32U4 Robot Controller LV to double as a Raspberry Pi HAT:

The Robot Controller fits on top of a Raspberry Pi A+/B+/2, powers the Pi, and connects to it as an I²C slave device, giving you a bidirectional channel of communication between the two processors. We have broken out all of the GPIO of the Raspberry Pi, and there are a few general-purpose level-shifters included on the board to help you experiment with other communications protocols or interface other hardware to your system. We even include the EEPROM required by the HAT specification, though we have not found it to be particularly useful – we ship it blank and unlocked for you to experiment with.

For more information about the A-Star 32U4 Robot Controller LV, or to order, see the product page. You can also check out our open-source A-Star 32U4 Arduino library, which provides easy access to the main features of the Robot Controller, including its motor drivers; we will be adding examples showing I²C communication with the Raspberry Pi soon.

To wrap up this round of distributor introductions, I would like to welcome the following new Pololu distributors in Asia:

See the full list of over 200 distributors to find one in your area.