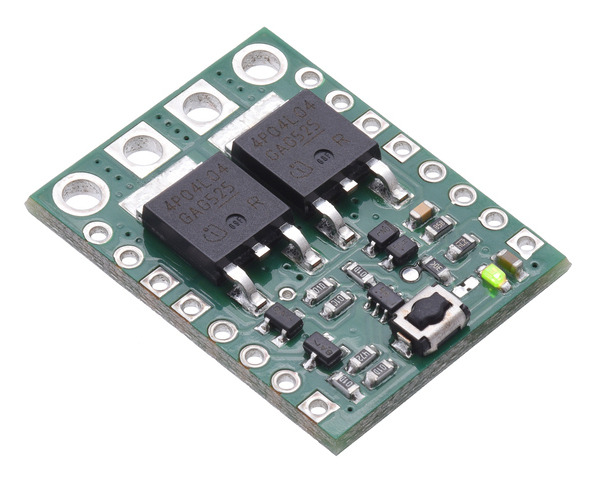 The Pololu Pushbutton Power Switches are sophisticated power control alternatives to bulky mechanical switches. The main function is pushbutton-based latching power control, where one push turns on power and another push turns it off. Additional control inputs allow advanced applications such as automatic shutdown by the device being powered. This HP version operates from 4.5 V to 40 V and can deliver continuous currents up to around 16 A.

Compared to the previous versions of the Pololu pushbutton power switches, the new versions have substantially expanded operating voltage ranges along with reverse-voltage protection and more control options. The size and pinout has changed, so the new versions cannot be used as direct drop-in replacements for the old ones.

Two 8-pin straight breakaway male headers and two 2-pin 5mm terminal blocks are included with each switch, and you can choose which of these components, if any, to solder to the board. The terminal blocks work with the four large holes, and the header strips allow the switch to be used with solderless breadboards and perforated circuit boards with standard 0.1″ spacing. If you want to use the terminal blocks, we recommend you install them on the side of the board without components, as shown in the above breadboard picture. The terminal blocks will cover one of each of the smaller VIN and VOUT holes, so you should not solder header pins into those holes if you plan on using terminal blocks.

The switch operating range is limited by the ability to change state reliably. At low voltages, the switch is difficult to turn on, and the switch will turn itself off once the voltage falls far enough (this shutoff point can be as high as 4.5 V). At high voltages, the switches are more likely to turn on when power is initially applied. The reliability of turning off is affected by a combination of the supply voltage, the amount of bouncing on the pushbutton switch, and the amount of noise on the supply line. For applications at the high end of the operating range, tests should be performed to ensure that the device can properly turn off.