Pololu customer Alvaro Villoslada made this impressive open-source 3D-printable hand prothesis. Each finger uses a 1000:1 Micro Metal Gearmotor HP 6V with Extended Motor Shaft to wind a fishing line—acting as a tendon—onto a spool. A magnetic encoder attached to each motor enables closed-loop control, and the motors are driven by DRV8838 DC motor driver carriers. An RC hobby servo controls the thumb position. Alvaro uses a Teensy 3.1 microcontroller to monitor the encoders and control the actuators, and he built a user interface in Python for controlling the hand from a computer.

Forum member jwatte posted about a robot he made for the RoboGames MechWarfare 2017 competition. The goal is to build a walking robot that tries to hit an opponent’s pressure sensors with airsoft pellets or melee weapons. The robots walk around in a scaled-down cityscape field. Autonomous operation and teleoperation are allowed, but teleoperators must view the field from cameras mounted on the robot.

For more details including a system block diagram see the forum post.

One of the main features of the kit is that it provides a backlit 2×20 character LCD to replace the receiver’s original 5-digit 7-segment display, allowing much more information to be shown. The kit includes a clear plastic window to replace the receiver’s original smoked dark plastic window, and a black plastic display mask. Edward gets both of these pieces made using our custom laser-cutting service.

The display/control board in the kit uses the P-Star 25K50 Micro as its processor. Edward, a consulting engineer who designs embedded hardware and firmware, told us that he chose the P-Star because he was already using a Microchip processor similar to the P-Star’s PIC18F25K50 in one of his previous designs, and it was more economical to buy the P-Star than to hand-assemble his own board. He said the P-Star’s cross-platform USB firmware upgrade software was also a plus since his own bootloading software does not support Linux and macOS.

The kit comes with software for Windows that can control the receiver over USB. The software provides a graphical user interface and uses WinUSB to talk to the P-Star’s native USB interface.

The Rebel WIP from UNLV 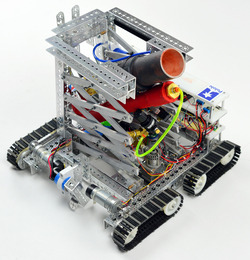 It has been over a year since my last/first blog post about my mini sumo robot. Since then, I have been busy studying to earn a mechanical engineering degree at the University of Nevada, Las Vegas, working at Pololu, and, of course, building cool robots. Recently, I have been working as part of a UNLV team, Rebel Robotics, to build a robot to compete in an intercollegiate competition organized by the American Society of Mechanical Engineers (ASME) called the Student Design Competition. My team’s robot, the Rebel WIP (work in progress), competed against teams from colleges across the western half of the United Sates in the Student Design Competition at an engineering festival hosted by UNLV and ASME called E-Fest West. Continued…

One of our customers built this six-foot tall balancing robot. The main microcontroller is a Teensy 3.6, and the stepper motors are driven by ST-M5045 drivers. For its drive train it uses two 3 A stepper motors connected to Pololu 90 mm wheels via Pololu universal aluminum mounting hubs.

Here’s what they have to say about using stepper motors:

I used stepper motors to take advantage of high torque at low RPM and zero backlash. This allows very steady stand-still performance. But dealing with the stepper-induced mechanical vibration was an issue. This was mostly solved with analog filters on the IMU and with an Extended Kalman Filter in software.

Additional description and pictures are available on the project page.

Julien de la Bruère-Terreault (also known as DrGFreeman on the Pololu Forum, creator of the Custom Mini Sumo robot and the Romi and Raspberry Pi robot shared on this blog) made “SharpDistSensor” an Arduino library for analog Sharp distance sensors. If you’re running a recent version of the Arduino IDE, you can install it with the Library Manager. The library reads the sensor’s analog voltage output, filters the data, and converts it to a distance measurement. By default it is calibrated to work with the Sharp GP2Y0A60SZLF analog distance sensor 10-150cm 5V, but you can calibrate it to other analog Sharp distance sensors (if you can fit a power function or a fifth order polynomial to the voltage vs distance response of your sensor). Pull requests are welcome for supporting other Sharp distance sensor models!

The readme, library code, and example sketches are available in the GitHub repository.

One of our customers used our custom laser cutting service to cut the birch plywood panels for his retro-gaming TV system that he sells on Etsy. The birch panels are stained with shellac. The system runs on a Raspberry Pi 3 Model B, to which you can connect (not-included) controllers with Bluetooth or USB. The Raspberry Pi’s Ethernet port, SD card slot, and 4 USB ports are accessible in the back.

For the complete project documentation including more pictures and videos, see their GitHub project page. Lujing also posted about it on the Pololu Forum.

Forum user DrGFreeman has been busy making robots. I wrote earlier about his Custom Mini Sumo robot; now here is his Romi Chassis and Raspberry Pi robot. It solves mazes using a webcam to do line tracking and intersection identification. This robot is a great example of how a variety of Pololu robot parts can combine into an attractive and functional robot. A black Romi chassis kit provides the base for the robot, to which DrGFreeman added a encoder pair kit and ball caster kit. An A-Star 32U4 Robot Controller SV with Raspberry Pi Bridge drives the motors and monitors four Sharp GP2Y0A60SZLF analog distance sensors and the Romi encoders. The robot controller and the Raspberry Pi communicate via I²C and are elevated above the chassis on a narrow Pololu RP5/Rover 5 expansion plate.

DrGFreeman is also working on a mast for three VL53L0X time-of-flight distance sensor carriers that he plans to add for simultaneous localization and mapping (SLAM).

For more videos, pictures, and details, see the forum thread. The robot’s Raspberry Pi (Python) and Arduino code is available on GitHub.

Forum user coyotlgw made this teleoperated Raspberry Pi robot. The robot is controlled remotely over SSH via the Raspberry Pi’s WiFi connection, and snapshots of the webcam feed are available via a Motion web server. The motors of the Dagu Wild Thumper 4WD chassis are driven by a Pololu Dual MC33926 Motor Driver for Raspberry Pi connected to a Raspberry Pi 2 Model B. A Pololu A-Star 32U4 Mini LV interfaces with and records readings from temperature, pressure, humidity, and UV/IR/visible light sensors.

For more pictures, details, and a discussion of the issues encountered during the build, see the forum post.