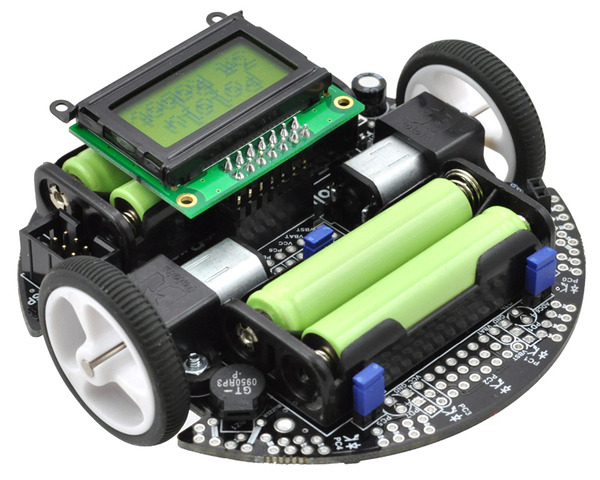 The Pololu 3pi robot is a complete, high-performance mobile platform featuring two micro metal gearmotors, five reflectance sensors, an 8×2 character LCD, a buzzer, and three user pushbuttons, all connected to a C-programmable ATmega328 AVR microcontroller. Capable of speeds exceeding 3 feet per second, 3pi is a great first robot for ambitious beginners and a perfect second robot for those looking to move up from non-programmable or slower beginner robots.

Compare all products in Original 3pi Robot or

This guide explains how to get started programming your Orangutan or 3pi Robot in Windows, Linux or Mac OS X. It covers setting up an AVR development environment (Atmel Studio for Windows users), installing the Pololu AVR C/C++ Library, and setting up the Pololu USB AVR Programmer.

Information about installing and using the C/C++ libraries provided for use with Pololu products.

A reference to commands provided in the Pololu C/C++ and Arduino libraries for the AVR.

Step-by-step instructions for building your own line-following courses.

Programming Orangutans and the 3pi Robot from AVR Studio 4

Guide for programming Orangutans and the 3pi robot from the Atmel’s older AVR Studio 4 IDE. It covers installing the Pololu AVR C/C++ Library, and setting up the Pololu USB AVR Programmer.

Guide to making the Arduino IDE compatible with the 3pi robot and the Orangutan SV-328, Orangutan LV-168, and Baby Orangutan B robot controllers, including Arduino libraries for interfacing with all of their on-board hardware.

Sample robot project for enhancing a 3pi robot to drive around objects on its left.

Detailed information about the 3pi Robot, Orangutan SV-328/168 and LV-168, and Baby Orangutan B motor drivers, including truth tables and sample code.

Various videos of the Pololu 3pi robot in action.

3pi quick-start sheet and schematic (486k pdf)
A print-out of this quick-start sheet is included in with each shipped 3pi robot.
3pi simplified schematic diagram (481k pdf)
Pololu 3pi Robot guia de usuario (3MB pdf)
A Spanish version of our Pololu 3pi robot’s user’s guide provided by customer Jaume B, updated Nov 16, 2009.
Line Maze Algorithm Presentation (505k pdf)
A detailed presentation on teaching a robot to solve a non-looped line maze written by customer (and robotics professor) R. Vannoy. This can help you to better understand how to solve a line maze with your 3pi or custom maze-solving robot.
3pi main board drill guide (220k dxf)
This DXF drawing shows the locations of all of the board’s holes.

Pololu 3pi Forum Section
The 3pi discussion section of the Pololu Robotics Forum.
Tabletop Robotics 3pi Projects
A series of interesting, customer-created open source projects for the 3pi robot, including barcode reading, grid navigation, and remote control.
Simple 3pi Projects for the Arduino IDE
These customer-written projects are intended to introduce the novice user to all the components on the 3pi robot and how they can be used while programming with the Arduino IDE. Each project builds on the one before it and comments within the programs are used to provide background information when new items are introduced. By Daniel J. Sullivan, August 2011.
ATmega328P documentation
Atmel’s product page for the ATmega328P.
AVR Libc Home Page
The web site for AVR Libc, which is the standard library of functions that you can use with C and C++ on the AVR.
AVR Freaks
AVR community with forums, projects, and AVR news.
GCC, the GNU Compiler Collection
Documentation for GCC, including the AVR GCC C/C++ compilers.
WinAVR
A free, open-source suite of development tools for the AVR family of microcontrollers, including the GNU GCC compiler for C/C++.
AVR Studio 4
The older version of Atmel’s free integrated development environment (IDE) for AVRs, which is no longer supported by Atmel.
Anibit graphical programming tool for the Pololu 3pi
This tool, which was made by Anibit, one of our distributors, provides a graphical programming environment for the 3pi robot which runs inside a web browser. The graphical code is converted to Arduino C++ code, which you can then copy and paste into the Arduino IDE. To use this tool, you will need to set up the Arduino IDE for programming the 3pi.
Pololu 3pi: the 10,000 Mile Review
Review of the 3pi robot written by R. Steven Rainwater, founding editor of Robots.net.
Tutorial: AVR Programming on the Mac
Customer Michael Shimniok has written a guide to programming AVRs (the Orangutan LV-168, specifically) using the Mac.
Otimização Do Algoritmo De Maze Solver Para O Robô Pololu 3pi
A paper (in Portuguese) describing the Pololu 3pi robot in general, and, specifically, how to write optimized maze solving code. By Ana Paula, December 2010.
Home-made m3pi robot controlled by Bluetooth keyboard
An mbed notebook (in Japanese) showing a 3pi robot with an ARM mbed controlled by Bluetooth keyboard. By Kazuhiro Ouchi, December 2010.