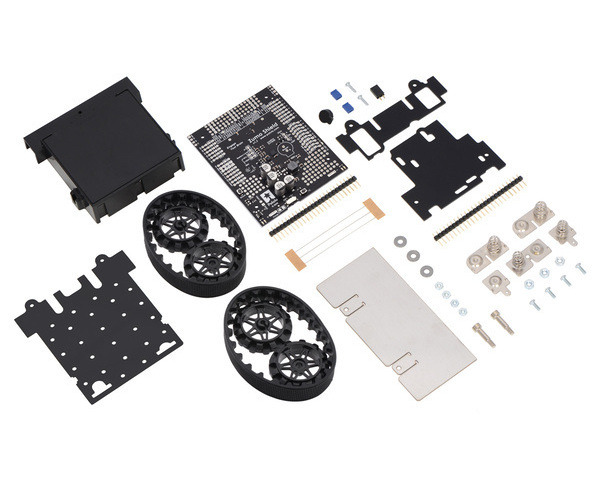 This kit contains most of the parts you need to build an Arduino-controlled Zumo robot. It consists of a Zumo Shield for Arduino, a Zumo chassis kit, and a Zumo blade. You will also need a pair of micro metal gearmotors, four AA batteries, and an A-Star 32U4 Prime or Arduino to complete your Zumo robot (motors, batteries, and Arduino sold separately). This product is a kit; assembly (including soldering) is required.

New inertial sensors! In September 2020, we started transitioning to shipping this kit with the v1.3 version of the Zumo Shield. The main difference is the new version replaces the shield’s inertial sensors with an LSM6DS33 accelerometer and gyro and an LIS3MDL magnetometer, as the LSM303D accelerometer and magnetometer used on the original revision has been discontinued. You can use our updated Zumo Shield Arduino library to help you write code that will work with the inertial sensors on either revision. In addition, the power switch and pushbuttons on the v1.3 shield have been changed to be surface-mount parts. For more information, see the user’s guide.

All units shipping now from Pololu have the newer v1.3 shield. If you require units with the previous v1.2 version, please contact us before you place your order.

Please see the specific pages for those products for more information about them, assembly instructions, and links to related resources.