Continuing with our recent LED product line expansion, we now offer several of Adafruit’s NeoPixel rings. These addressable RGB LED rings are available in a 1.75″-diameter 16-LED ring, a slightly larger 24-LED ring, and as 15-LED quarter-rings that can be assembled into a large 60-LED ring.

The NeoPixels are effectively WS2812B RGB LEDs that are individually addressable and controllable by a single digital pin from a microcontroller. Multiple rings can be chained together, and the rings can be chained with our other WS281x-based LED products. The animated picture below shows the three different sizes of rings we carry connected in a single chain and controlled by a single pin from an A-Star 32U4 Micro, which is small enough to fit completely within the smallest ring.

At first glance, these new LEDs look like everyday through-hole RGB LEDs, but they are hiding something very special inside: a built-in WS2811 LED driver that lets you chain them together and individually control them all with a single digital output from a microcontroller. The communication protocol of these LEDs is very similar to that of our WS2812B-based LED strips and Adafruit’s NeoPixels (such as those on the Adafruit NeoPixel Shield, which we just started carrying last week), so there is a variety of sample code available for the Arduino, AVR, and mbed microcontroller platforms to help you make your project start blinking quickly.

I love LEDs and all of the shiny, blinky, colorful things you can do with them (see what we did to my house last Christmas), so you can imagine how happy it makes me that we are now carrying Adafruit’s NeoPixel Shield for Arduino! With 40 individually addressable, WS2812B-based RGB LEDs all controlled by a single Arduino pin, this shield is effectively like a grid version of our addressable RGB LED strips. And just like our LED strips, multiple NeoPixel shields can be chained together into larger arrays. Controlling the LEDs is easy with the help of the compatible Arduino libraries, which include the Adafruit NeoPixel and NeoMatrix libraries, as well as our Arduino library for addressable RGB LED strips. This shield is a great way to add color, style, or functionality to your next Arduino project!

For more information on the NeoPixel shield, see the product page.

Get FREE copies of Circuit Cellar magazine’s June issue and Elektor magazine’s June issue with your order, while supplies last. To get your free issues, enter the coupon codes CIRCUIT0614 and ELEKTOR0614 into your shopping cart. Each magazine will add 6 ounces to the package weight when calculating your shipping options.

Continuing with our recent theme of tiny new actuators, we are now carrying FS90R micro continuous rotation servos from FEETECH. Continuous rotation servos are standard hobby RC servos that have been modified for open-loop speed control instead of their usual closed-loop position control, and they make convenient drive systems for robots because they are effectively a motor, gearbox, and motor controller/electronic speed control (ESC) in a single compact package. They are also very easy to use as they can be connected directly to an RC receiver or controlled by a single microcontroller I/O line programmed to output RC servo pulses.

With a weight of just 9 g, the FS90R is the smallest servo we have come across that is manufactured specifically for continuous rotation. It has great speed and torque for its size (up to 130 RPM and 1.5 kg-cm at 6 V), and at only $5 per servo, it is a very simple and affordable way to add some motion to your next project. For comparison (or if you are looking for an alternative servo that offers position control), it is very similar in size, weight, speed, and torque to the Power HD Micro Servo HD-1900A.

We are particularly excited about this regulator family because of its wide operating voltage range, high efficiencies, and low dropout voltages, all in a compact 0.5″ × 0.4″ × 0.1″ (13 mm × 10 mm × 3 mm) form factor that is smaller than standard through hole linear regulators with DIP packages. For example, the picture below shows a D24V5Fx next to a 7805 voltage regulator in a TO-220 package:

These regulators operate at up to 36 V, making them especially useful in applications where there can be large variation in the input voltage, such as solar-powered systems or devices where power supply flexibility is a benefit. Since they are switching regulators, the efficiency is much higher than linear regulators when there is a big difference between the input and output voltage, and since they are synchronous, the efficiency is high even at light loads and low output voltages. As an example of the versatility of these regulators, the same D24V5F2 module can in one application be used to get 2.5 V from a 24 V battery and in another be an efficient way to add a 2.5 V node to a system that already has regulated 5 V. As the performance graph below shows, typical efficiency in the latter scenario is 90%, which could almost double battery life in portable systems when compared to linear regulators.

We consider the new D24V5Fx regulators to be next-generation alternatives to our D24V3Fx and D24V6Fx buck regulators, which have been some of our most popular products. In addition to having generally higher efficiencies (which in practice allow these 500 mA units to achieve maximum output currents comparable to our 600 mA D24V6Fx units), these new regulators have much lower dropout voltages (“dropout voltage” is the amount by which the input voltage must exceed the output voltage in order to ensure that the target output can be achieved). For example, the two graphs below show the dropout voltage of the new 5 V D24V5F5 compared to the older 5 V D24V6F5 and D24V3F5:

What this means for your project is broader operating ranges and longer battery life. For instance, a low-power 5 V system running on a 9 V battery can discharge it all the way to 5 V whereas the higher-dropout D24V6F5 regulator can only go to 6.5 V, and four-cell alkaline and five-cell NiMH packs (both with 6.0 V nominal voltages) become viable options. 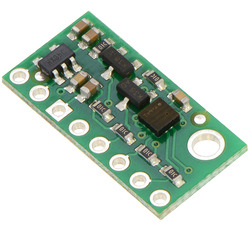 We’ve just released a carrier board for ST’s newest pressure sensor, the LPS25H, and we’re also lowering the price of our LPS331AP carrier.

Like the LPS331AP, the LPS25H provides pressure readings over a range of 260 mbar to 1260 mbar (26 kPa to 126 kPa), and this data can be used to calculate the sensor’s altitude. Our LPS25H carrier mounts the sensor on a 0.4″ × 0.8″ board (0.1″ shorter than our earlier LPS331AP carrier) that breaks out all of its pins, and as usual, we’ve included level shifters and a regulator to make it easy to use in a 5 V system. Continued…

We are expanding our selection of products from Adafruit, and the latest addition is the Adafruit Pi Case, a stylish protective enclosure for the Raspberry Pi. And to celebrate, we are dropping the price of our Raspberry Pis!

Need a “little” help with your next electronics project? Get it up and running with our sub-micro plastic planetary gearmotors! Measuring a minuscule 6 mm in diameter and weighing just over a gram, these gearmotors are even smaller (and much lighter) than our popular micro metal gearmotors.

Our sub-micro plastic gearmotors are available in two gear ratios: 26:1 and 136:1. Click on those ratios to learn more about each motor!

While there are no mounting holes, their cylindrical bodies makes them perfect for snapping into 1/4″ (6 mm) fuse clips, and their small scale makes it easy to affix them with tape or glue. We are also now carrying tiny 14 × 4.5 mm wheels, which are compatible with the sub-micro plastic gearmotor output shafts.

But, Jon, what can I do with such a tiny, adorable motor?

I’m glad you asked! The way I see it, you really only have two options:

I’m just kidding; there are definitely plenty of interesting things that can be made with these motors. We can’t wait to see what you use these motors for!

We are now carrying metal servo horns that work with Power HD’s ultra-high-torque HD-1235MG giant servos, which can deliver a whopping 560 oz-in (40 kg-cm) at 7.4 V. If you want to get the most power out of your HD-1235MG, I recommend substituting one of these anodized aluminum horns for the included plastic horns.