All of the sale details are now listed on our Black Friday/Cyber Monday sale page. Check them out and get your carts ready because the sale starts in less than six hours! Here are just some of the deals: 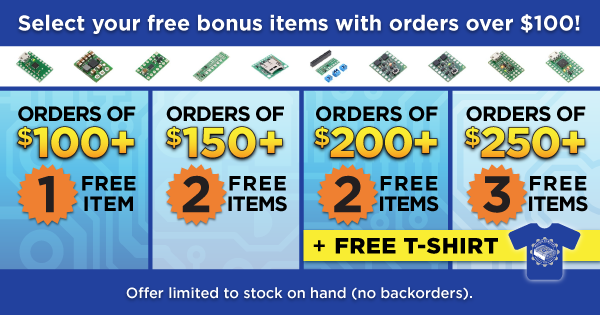 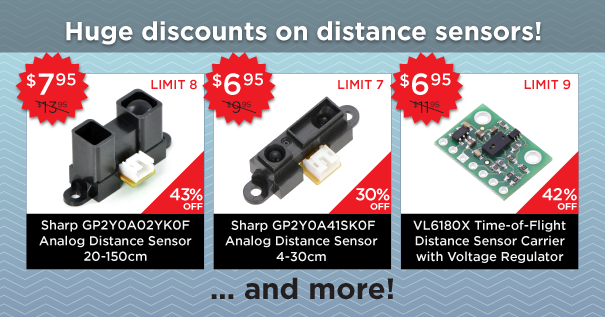 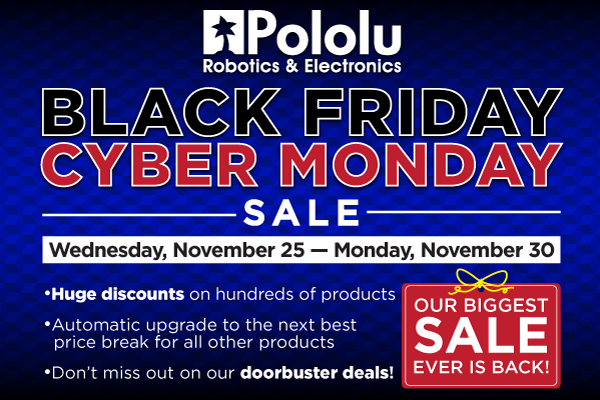 Our biggest sale of the year is less than two days away! As in previous years, we are offering huge discounts on hundreds of products, but we’re also introducing a new feature this time around: upgrades to the next best price break on the rest of the products we carry. You will also be able to select free bonus items with orders over $100. We have put up some of the special offers on the Black Friday/Cyber Monday sale page; stay tuned for more details, including the full list of discounted products and coupon codes.

Robot enthusiasts: if you want to show your Pololu pride but covering yourself with Pololu stickers just doesn’t seem fashionable, we’ve got good news for you! Our new Zumo T-shirts are here, featuring a Zumo 32U4 robot within a sprocket-inspired border, accompanied by our call to “Engage Your Brain”. These pre-shrunk cotton shirts are available in several colors (royal blue, cardinal red, or charcoal gray) and a range of sizes.

Our mini MOSFET-based power switches now have a set of companion versions with larger MOSFETs:

As I mentioned when announcing the Mini switches in September, they have many advantages over our older pushbutton power switches, including a much larger input voltage range and reverse protection, but the current limits were lower. With the new big switches, we can now support applications well beyond what the older products could handle. We are offering two versions with different MOSFETS: the MP unit can handle about 8 A, and the HP version is good for about 16 A. Both operate over the same 4.5 V to 32 V range as the Mini SV switches.

Like the mini power switches, these big switches are available with our patented push-on/push-off latching circuit or with a simple slide switch:

For more information, see the links below or check out our power switch category. 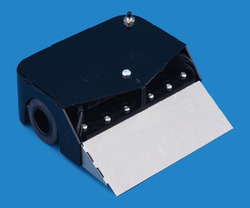 We are excited to announce the release of the Pololu G2 High-Power Motor Driver 24v13. Like our original high-power motor drivers, this board is a discrete MOSFET H-bridge that is designed to drive large DC brushed motors. As the first of our second-generation high-power motor drivers, the 24v13 can supply a motor with a continuous current as high as 13 A at voltages between 6.5 V and 40 V (absolute maximum).

The G2 driver is designed to be a near drop-in replacement for its predecessor, with an identical form factor and a similar pinout, but it offers a number of new features and improvements over the older version. Reverse-voltage protection on the power supply inputs helps prevent instant destruction if a battery is connected backwards, while basic current sensing and limiting functionality help the driver handle large loads more gracefully. The G2 driver is also compatible with systems running at 3.3 V (and lower), unlike our original high-power motor drivers.

To learn more about the motor driver’s features and capabilities, see its product page.

Now that we are carrying Advancer Technologies’ MyoWare Muscle Sensor, it is time to update our demonstration video! I’ve had two whole years to add some mass to my biceps (during which time I continuously worked on those bad boys for a grand total of four weeks), and now I can proudly present to you these sick gains.

The demonstration is basically a redo of the original muscle sensor demo with the new sensor, except for a few small differences (honestly, my biceps are not that much bigger). In this setup, a 6-channel Maestro reads the muscle sensor’s analog voltage output and commands the position of a Power HD servo. The Maestro’s +5 V (out) pin supplies power to the MyoWare Muscle Sensor, and the servo and Maestro are powered by 4 rechargeable AA batteries. On a personal note, I found it really satisfying to use a single power source for this demonstration, which is not something you can do with the previous version of this muscle sensor, as it requires two supplies. (Be sure to check out the MyoWare Muscle Sensor’s product page to read about more ways the new muscle sensor improves upon the older version!)

This Maestro script is slightly more interesting than the script in the last demo, since the servo’s default direction of rotation was the opposite of the motion for a bicep curl (and we were already quite happy with the servo’s orientation with respect to my arm for the planned video footage). To get around this, and make the servo arm movement match the position of my arm during a bicep curl, I did some basic math and came up with an equation that you can see in the code below:

You can, of course, use other devices to read the analog voltages from the MyoWare Muscle Sensor. If you have not already, you might try using one of our A-Stars!

If you have a project that uses the MyoWare Muscle Sensor, we would be pumped to hear about it!

Our 37D mm metal gearmotors now have fitted plastic end caps over their encoders that neatly protect the assembly and keep stray objects clear of the magnetic disc. The pictures below show the previous version (without end cap) next to one of the new ones:

The end cap is easily removable if you need to access the encoder or want a few more millimeters of clearance for your gearmotor, but there is a little bit of base plastic that will remain (as shown in the picture below), so removing the end cap does not quite make these new ones identical to the previous versions.

These gearmotors are available in six different gear ratios and with or without encoders, and we also carry the motor and encoder assembly by itself with no gearbox. The following table shows all of our 37D mm metal gearmotor options: