And last call for our Christmas sale — only about 12 hours to go! Merry Christmas!

We are excited to announce the newest additions to our selection of servos:

These specially modified versions of the standard FEETECH FS90 and FS5103B servos provide direct access to the feedback potentiometer through an extra fourth wire. Additionally, the FS90-FB has an extra long cable relative to the standard FS90 micro servo. The inclusion of a feedback wire allows you to monitor the servo’s position, which is especially useful for more complex robotic applications. For example, it can be used for determining if the servo is stalled or when it has reached it’s target position. It also allows you to implement your own higher-level closed-loop position control or create servo movements by hand that you can record and play back later. This feedback voltage varies linearly over the servo’s range of motion.

These servos are similar to those used in the Robot Arm Kit for Romi and Micro Gripper Kit and can be used as replacements for those servos.

These are just the start of our eventual selection of FEETECH servos with position feedback, so keep an eye on our blog and New Products category for more to come!

(A little more than) twelve days of Christmas sale 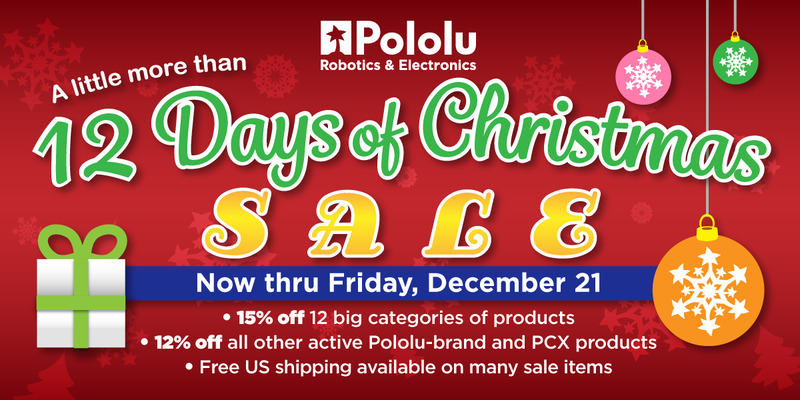 If you missed our Black Friday sale or realize you didn’t quite get everything you wanted, don’t fret: we have all active Pololu-brand and PCX products on sale for 12% off, and we are offering 15% off twelve broad categories of our products. The sale runs through Friday, December 21, but be careful to order early for delivery before Christmas. Save on your Christmas shopping, or stock up now on robot parts for the new year. Check out the sale page for all the discounts and coupon codes. Merry Christmas! 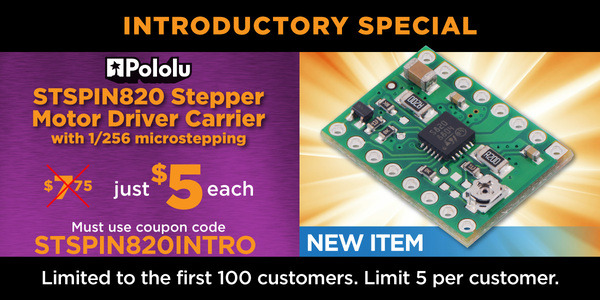 We have yet another new stepper motor driver carrier in our popular 16-pin, 0.6″ × 0.8″ form factor, this time for STMicro’s STSPIN820, which offers 1/256 step microstepping! ST actually has their own similar evaluation board, the EVALSP820-XS, but the STSPIN820 chip has a non-inverted Enable input, which is inverted compared to most other stepper motor driver ICs out there, and they expose the pin that way on their version of the board. We have thoughtfully added a transistor-based inverter so that our board is more likely to work as a drop-in replacement (or upgrade!) for the stepper driver boards you already have. In our tests, the Pololu carrier supported a substantially higher maximum current than the ST eval board (around 900 mA compared to 720 mA, probably due to our board having four layers vs. two layers for the ST eval board), and as of this writing (27 November 2018), our board is also priced lower.

You can see the full schematic for all the details (this schematic is also available as a downloadable pdf (109k pdf)):

As with all of our new products this year, we are offering an introductory special. The first 100 customers that use coupon code STSPIN820INTRO can get up to five units at just $5 each. 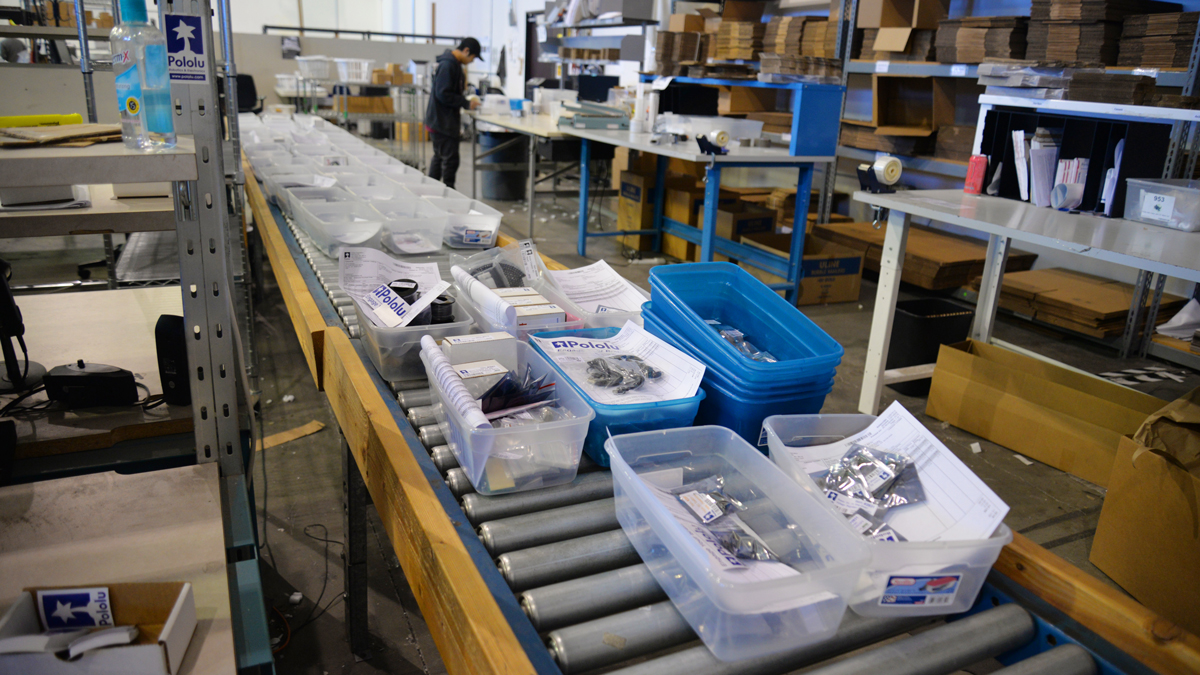 Things are slowing down in our warehouse as our biggest sale of the year winds down, and to all those who have ordered, thank you! There’s still time for you to get in on today’s deals if you haven’t already, but don’t wait too much longer: the deals end at midnight Pacific time.

Our friends at Adafruit are also having a Cyber Monday sale, with 20% off on their CircuitPython product line and 15% off sitewide. See their blog post for more details! 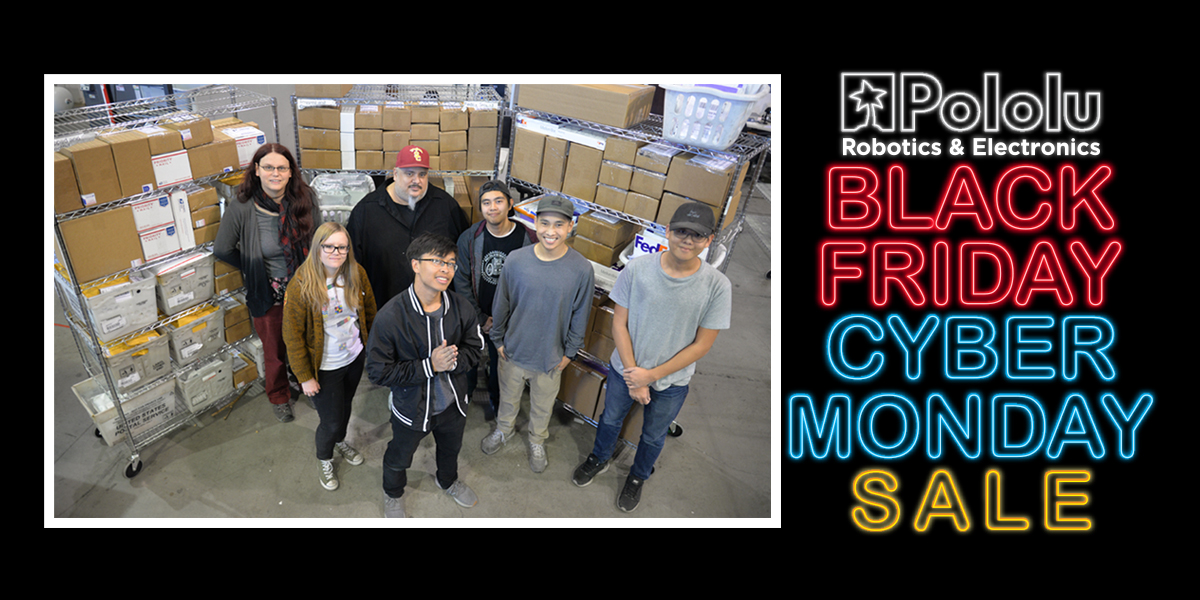 Our biggest sale of the year is underway, and manufacturing and shipping are working hard to make your robot parts and ship them out. You’ve done a fantastic job challenging them so far, but they’ve still managed to keep up with our same-day shipping guarantee, even though we have suspended that during the sale. Let’s keep up the pressure and challenge them even more as the sale goes on!

There will be no doorbusters this weekend, just great deals on lots of products all weekend long. Doorbusters will return Monday morning, the last day of the sale.

Now, for something else fun: in the spirit of Thanksgiving, we dressed a Romi robot up as a Turkey. Enjoy! 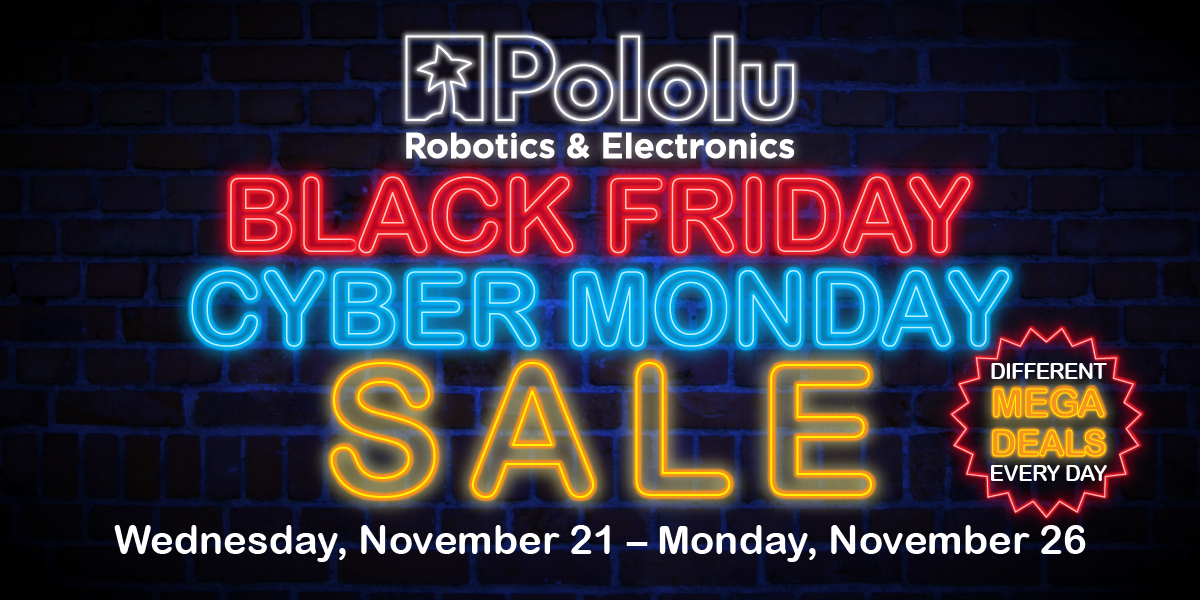 Greetings and Happy Thanksgiving from Pololu! Our biggest sale of the year is almost here, and like last year, we are offering different deals and doorbusters every day, starting tomorrow and running through Cyber Monday. Most sale products will be available with free US shipping, which should make it easy for you to place multiple orders throughout the sale to get in on the different deals. All of the sale details along with Wednesday’s specials are up on the sale page now, and don’t forget that the Wednesday doorbusters start at 6 AM Pacific Time!

Be sure to check the sale page daily for new deals, and you can also sign up for our mailing list to receive sale updates and exclusive offers.

The two new RoboClaws bring our total selection of those to nine versions. Unlike the other RoboClaws, which have a maximum operating voltage of 34 V, these new RoboClaws and some of the new MCP controllers can work up to 60 V and deliver a continuous 60 A or 120 A per channel, making them the most powerful motor controllers we carry by far.

The six MCP products are from Basicmicro’s rugged new line of MCP Advanced Motor Controllers, which are optionally programmable via a built-in scripting language and support a variety of interfaces, including USB serial, TTL serial, RS-232 serial, CAN bus, RC hobby servo pulses, and analog voltages. Here is a summary of the key features of the MCP: 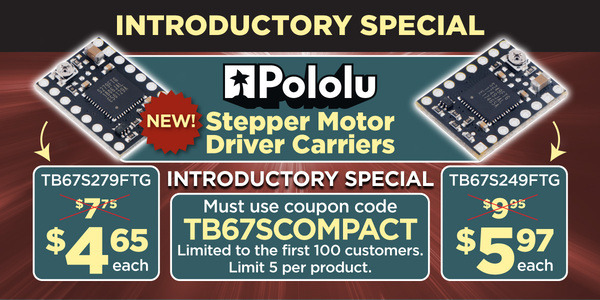 Earlier this week, we released new compact carriers for Toshiba’s great stepper motor drivers, the TB67S249FTG and TB67S279FTG. We released larger carrier boards for those two chips in the summer, and those are still the version to get if you want to test all the features that those ICs offer. The new compact carriers are in our popular 16-pin, 0.6″ × 0.8″ form factor (which I originally designed for the Allegro A4983 back in 2009 when I was still routing most of our circuit boards), making it easy to use the new drivers on RAMPS-type 3D printer controllers that have the compatible sockets.

These Toshiba chips are massive, and you can see how much more space they take up on that common PCB size when compared to the original board (populated with the Allegro A4988 that replaced the A4983):

In addition to fitting the larger chip onto the same board space, we had to add some external inverters to make the enable and reset lines behave the same way as on the original modules (this schematic is also available as a downloadable pdf (141k pdf)).

We also had to hardwire many of the options that the TB67Sx49FTG chips offer. In particular, we set the Active Gain Control (AGC) lower current limit to 60%. This innovative feature on the Toshiba stepper drivers allows the current through the stepper motor to be reduced based on what the motor actually needs, which allows for reduced unnecessary heat generation in the motor and higher peak power when you actually need it. I have heard (from Toshiba’s competitors, who also acknowledged that Toshiba is one of the few big semiconductor companies bringing real innovation to stepper motor drivers) of the AGC feature not working in some applications, but when it works, it’s quite amazing. We tried out the Toshiba TB67S249FTG drivers on a Tevo Tornado 3D printer that originally had Allegro A4988 drivers on an MKS GEN control board, and we could run at higher current and with 1/32 microstepping instead of the A4988’s 1/16 microstepping, which also gave a noticeable improvement in print quality.

The TB67S249FTG is now our highest-power option, and in addition to delivering a little bit more power than our previous leader, the TI DRV8825, the Toshiba driver seems to provide better current control with the relatively low inductance, low resistance coils often used on these low-end 3D printers. If you do not need that maximum current aspect, you can get all the other special features with the lower-power, lower-cost TB67S279FTG.

As with all of our new products this year, we are offering an introductory special. For these two new modules, we are offering 40% off for up to five units (per version!) to the first 100 customers that use coupon code TB67SCOMPACT. This means you can try out the top-of-the-line TB67S249FTG for less than $6.