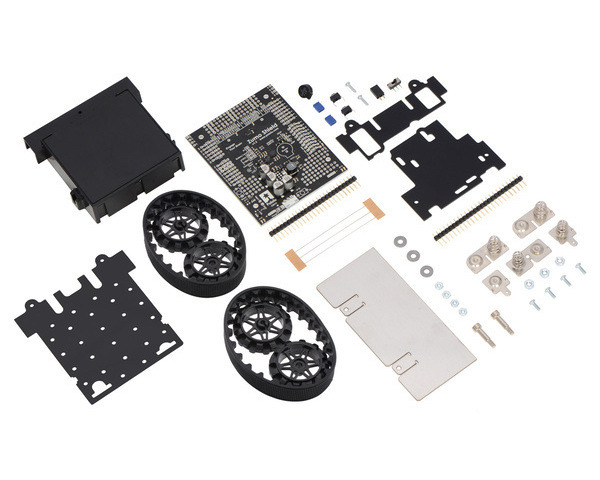 This kit contains most of the parts you need to build an Arduino-controlled Zumo robot. It consists of a Zumo Shield for Arduino, v1.2, a Zumo chassis kit, and a Zumo blade. You will also need a pair of micro metal gearmotors, four AA batteries, and an A-Star 32U4 Prime or Arduino to complete your Zumo robot (motors, batteries, and Arduino sold separately). This product is a kit; assembly (including soldering) is required.

Please see the specific pages for those products for more information about them, assembly instructions, and links to related resources. The only difference between this and the previous Zumo Robot kit version is the inclusion of a v1.2 Zumo shield in place of the previous shield version. The only changes to the shield are an upgrade of the integrated accelerometer/magnetometer IC and the addition of a 3-axis gyroscope.

July 10, 2015 update: This kit now includes black, spoked sprockets (see the main product picture) in place of the original white ones (which can still be seen in some of the pictures on this page).