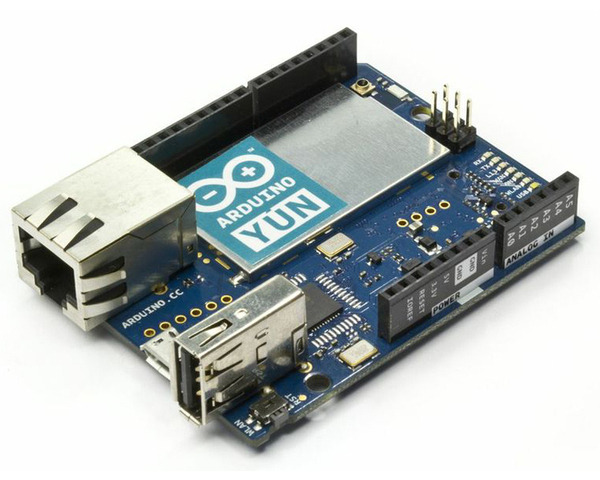 The Arduino Yun has the same footprint as an Arduino Uno but combines an ATmega32U4 microcontroller (the same as the Leonardo) and a Linux system based on the Atheros AR9331 chipset. Additionally, there are built-in Ethernet and WiFi capabilities, enabling it to communicate with networks out of the box. The combination of the classic Arduino programming experience and advanced internet capabilities afforded by a Linux system make the Yún a powerful tool for communicating with the internet of things.

Note: There are differences between the Arduino Yún and previous Arduino boards. As such, there could be incompatible Arduino shields and libraries. We have not tested the Arduino Yún with any Pololu shields.

The Arduino Yún is a microcontroller board based on the ATmega32U4 and the Atheros AR9331 that combines Arduino and Linux. The Atheros processor on the Yún runs Linino, a Linux distribution based on OpenWRT. The Arduino Bridge library facilitates communication between the two processors, giving Arduino sketches the ability to communicate with the Linux environment, running programs or making use of advanced peripherals. The USB host, network interfaces, and SD card are connected to the AR9331, and the Bridge library also enables the Arduino to interface with those peripherals. See Arduino’s guide to the Yún for more detailed information.

The Arduino Yún features a user-programmable ATmega32U4 AVR microcontroller that has built-in USB functionality, eliminating the need for a secondary processor or serial adapter for programming. This makes the Arduino Yún more versatile: in addition to supporting a virtual (CDC) serial/COM port interface, it can appear to a connected computer as a mouse and keyboard.

The Yún has 20 digital I/O pins (of which 7 can be used as PWM outputs and 12 as analog inputs), which are the same pins available on the Arduino Leonardo, and can be programmed through a Micro USB cable (not included) or over Wi-Fi. Power can be supplied to the Yún through a USB cable or the Vin pin (power supply not included). The Yún is also compatible with power over ethernet (PoE), but in order to use this feature you need to mount a PoE module on the board.

Warning: When powering the board through the Vin pin, you must supply a regulated 5 V. There is no on-board voltage regulator for higher voltages, which will damage the board.

The Arduino has a large support community and an extensive set of support libraries and hardware add-on “shields”, making it a great introductory platform for embedded electronics. Note that we also offer a SparkFun Inventor’s Kit, which includes an Arduino Uno along with an assortment of components (e.g. breadboard, sensors, jumper wires, and LEDs) that make it possible to create a number of fun introductory projects.

More information about the Arduino Yún is available on Arduino’s website.

The characteristics of the Yún’s two processors are shown below.

(1) The Arduino Yún has 20 total available I/O lines; all of them can function as digital I/O lines, and twelve of them can be used as analog inputs.

The table to the right compares the Arduino Uno to Orangutan robot controllers, which are based on the same AVR architecture and feature integrated motor drivers and additional hardware suitable for robotics applications. We also offer the Basic Stamp, which offers a lot of support and educational materials for beginners, and the much higher performance mbed development board, which is based on a 96 MHz 32-bit ARM Cortex M3. See their product pages for more information.