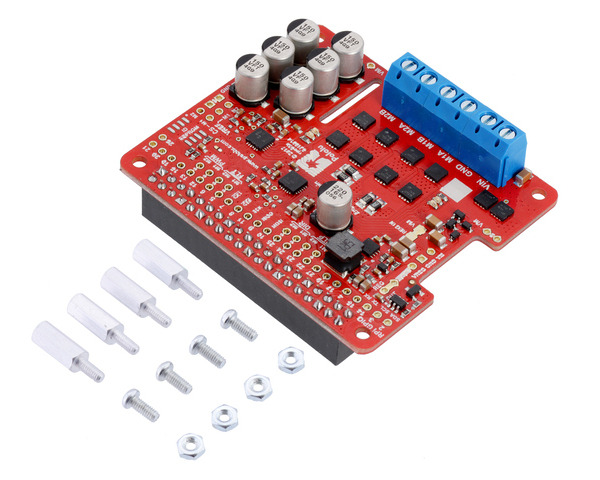 This add-on board makes it easy to control two high-power DC motors with a Raspberry Pi. Its twin discrete MOSFET H-bridges support a wide 6.5 V to 30 V operating range and are efficient enough to deliver a continuous 18 A without a heat sink. The drivers offer basic current limiting functionality, and they accept ultrasonic PWM frequencies for quieter operation. The default pin mappings make it easy to get started, but they can be customized for more specialized applications. This version ships fully assembled with connectors soldered in.

This version of the 18v18 motor driver is fully assembled, with a 2×20-pin 0.1″ female header (for the Raspberry Pi interface) and a six-pin strip of 5 mm terminal blocks (for board power and motor outputs) soldered in. It can be distinguished from the other versions by its red PCB and the number 150 on top of the six tall silver electrolytic capacitors at the corner of the board. (See item #3750 for a kit version with connectors included but not soldered in.)

Four M2.5 standoffs (11 mm length), screws, and nuts are included to secure the board to the Raspberry Pi at the proper height for the GPIO connector.

An appropriate motor power supply should be connected to the motor driver’s large VIN and GND pads. The board includes a reverse-voltage protection circuit that helps prevent damage in case the motor power supply is connected backward. The reverse-protected input voltage can be accessed for use in other circuits through the two pins labeled VM on the left side of the board.

By default, the motor power supply also feeds a 5 V, 2.5 A switching step-down regulator that provides power to the connected Raspberry Pi. An ideal diode circuit makes it safe to have a different power supply connected to the Raspberry Pi through its USB Micro-B receptacle while the motor driver is connected and powered.