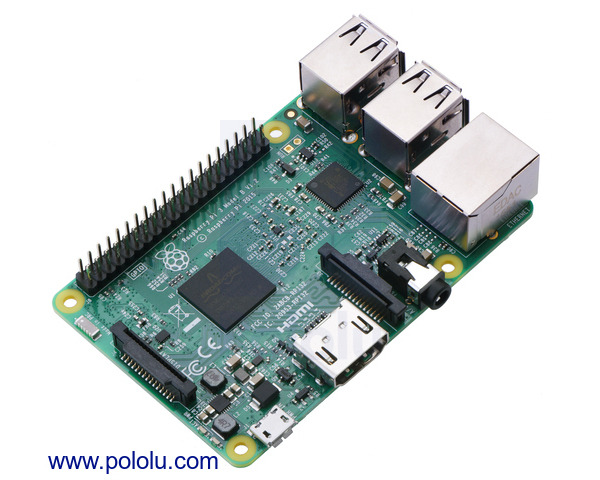 The Raspberry Pi is a credit card-sized computer with an ARM processor that can run Linux. This item is the Raspberry Pi 3 Model B, which has 1 GB of RAM, WiFi, Bluetooth 4.1, Bluetooth Low Energy (BLE), an Ethernet port, HDMI output, audio output, RCA composite video output (through the 3.5 mm jack), four USB ports, and 0.1″-spaced pins that provide access to general purpose inputs and outputs (GPIO). The Raspberry Pi requires a microSD card with an operating system on it (not included). The Raspberry Pi is very popular, with lots of example projects and information available online.

The Raspberry Pi is a credit card-sized computer. The Raspberry Pi 3 Model B is the third generation Raspberry Pi. It is based on the BCM2837 system-on-chip (SoC), which includes a 1.2 GHz quad-core ARMv8 64bit processor and a powerful VideoCore IV GPU. The Raspberry Pi can run a full range of ARM GNU/Linux distributions, including Snappy Ubuntu Core, Debian, Fedora, and Arch Linux, as well as Microsoft Windows 10 IoT Core.

The Raspberry Pi 3 Model B is the first Raspberry Pi to feature onboard wireless and Bluetooth connectivity. It has the same form factor and connector locations as the older Raspberry Pi 2 Model B and Raspberry Pi Model B+.

The Raspberry Pi was designed by the Raspberry Pi Foundation to provide an affordable platform for experimentation and education in computer programming. The Raspberry Pi can be used for many of the things that a normal desktop PC does, including word-processing, spreadsheets, high-definition video, games, and programming. USB devices such as keyboards and mice can be connected via the board’s four USB ports. Over twelve million Raspberry Pis have been sold, and lots of resources for the Raspberry Pi are available online.

The table below shows some key features and specifications of the Raspberry Pi boards to help you choose the right one for your application. For reference, it also includes the Model B+ and Pi 2 Model B, which we no longer carry.