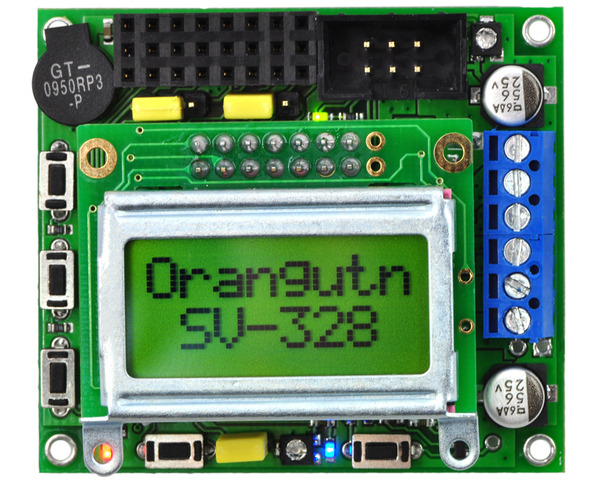 Want to build a small robot that doesn’t look like a PCB on wheels? The Orangutan is small enough for integrating into a small robot, rather than being the small robot. With Atmel’s powerful ATmega328P AVR microcontroller, motor drivers, buttons, display, and buzzer, all you need to add is your own chassis, sensors, software… you know, the fun stuff!

Eight general-purpose I/O lines with up to eight analog input channels allow for adding sensors or expanding the system. These lines are brought out to 0.1" female headers as shown in the picture below; from left to right, the bottom row of pins are: PC5, PC4, PC3, PC2, PC1, PC0, PD1 and PD0. The Orangutan SV-328 features a 5V switching regulator capable of delivering up to 3 A, allowing the Orangutan to power RC servos directly from its regulated 5V power bus. This power bus can be accessed through the power and ground pins dedicated to each user I/O line.

The Orangutan SV-328 is based on Atmel’s mega328 AVR microcontroller, which runs at 20 MHz and features 32 Kbytes of flash program memory, 2 Kbytes of SRAM, and 1024 bytes of EEPROM. Because the user has direct access to the microcontroller, any development software for Atmel’s AVR microcontrollers, including Atmel’s free Atmel Studio and the WinAVR GCC C/C++ compiler, is compatible with the Orangutan SV-328. An in-circuit programmer, such as our USB AVR programmer, is required for programming the Orangutan SV-328; we offer a combination deal that lets you save when you buy a programmer with your Orangutan. We provide an extensive set of software libraries that make it easy to interface with all of the integrated hardware. These libraries come with a number of sample programs that demonstrate how to use the various components on the Orangutan SV-328. This robot controller is also compatible with the popular Arduino development platform.

Improvements over the Original Orangutan

The Orangutan SV-328 has introduced a number of substantial improvements over the original Orangutan, the most significant of which is the enhanced power system that allows an expanded operating range of 6 – 13.5 V (meaning you can power the Orangutan SV-328 from a 12 V battery), delivers higher motor current, and has much more available current on the 5 V line. The following list details the major changes:

Note: This product could ship with either a silver-bezel LCD or a black-bezel LCD. Pictures of the two possible types are shown below.