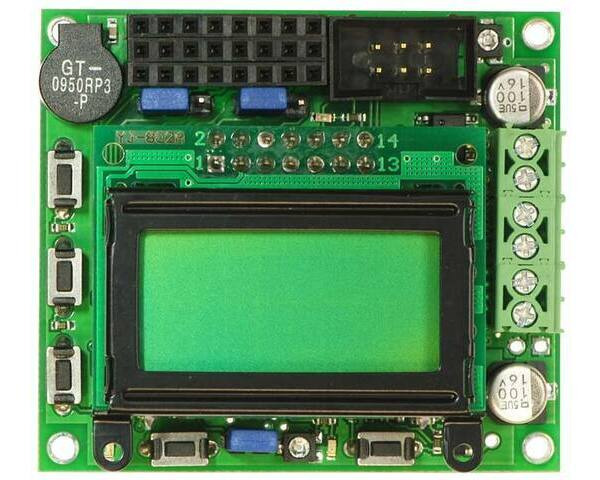 The Orangutan LV-168 is a full-featured controller for low-voltage robots. Thanks to a step-up voltage regulator, you can power this Orangutan with two or three 1.2-1.5 V batteries while maintaining 5 V operation for its Atmel mega168 AVR microcontroller and your sensors. A pair of discrete, low-voltage H-bridges deliver up to 2 A continuous per channel to get the most power out of low-voltage motors.

Note: This product is now only available by large-volume special order. Please contact us for more information.

The Orangutan LV-168 incorporates a step-up voltage regulator that generates 5 V from the lower input voltage, enabling the mega168 to run at its full speed of 20 MHz and allowing the use of sensors that require 5 V. Two discrete H-bridges using low-voltage MOSFETs allow efficient control of two bidirectional DC motors drawing up to 2 A each (continuously). The motor drivers can briefly deliver up to 5 A each, but each motor is protected by a resettable fuse that is triggered by excessive temperature. If a motor draws much more than 2 A for more than a few seconds, the voltage to the motor will be reduced, but normal operation will resume once the board has cooled down. An on-board temperature sensor can be connected to ADC6 for some (limited) feedback about the board temperature.

Like our original Orangutan, the Orangutan LV-168 is based on Atmel’s mega168 AVR microcontroller, which features 16 Kbytes of flash program memory, 1024 bytes of SRAM, and 512 bytes of EEPROM. Because the user has direct access to the microcontroller, any development software for Atmel’s AVR microcontrollers, including Atmel’s free AVR Studio and the WinAVR GCC C/C++ compiler, is compatible with the Orangutan LV-168. An in-circuit programmer, such as our USB AVR programmer, is required for programming the Orangutan LV-168; we offer a combination deal that lets you save when you buy a programmer with your Orangutan. We provide an extensive set of software libraries that make it a breeze to interface with all of the integrated hardware. These libraries come with a number of sample programs that demonstrate how to use the various components on the Orangutan LV-168. This robot controller is also compatible with the popular Arduino development platform.

The Orangutan LV-168 is designed to operate off of three NiMH cells, which corresponds to a voltage range of 2.5-4.5 V. In a typical application, you might power your Orangutan LV-168 with three AA batteries, for example. However, the unit can operate from two or four NiMH cells with some limitations. At lower voltages, the effectiveness of the motor drivers will be reduced, and the 5 V step-up regulator’s output current will be reduced. Beyond 5 V, the step-up regulator will cease operation and the input voltage will show up on the Vcc line; the components on the board can operate to 5.5 V, but some sensors you use might have a 5.25 V limit.

The Orangutan LV-168 matches the outline of a 3 AA battery holder almost perfectly, allowing you to combine the two into a single, compact unit.. Such a battery holder or a pre-assembled pack of similar size (often available as a cordless phone battery pack) will help you get up and running quickly.