Are you attending CES or in Las Vegas this Thursday evening? Join Pololu and LVBots on Thursday, January 8th any time from 5 p.m. to 8 p.m. for CES Open House 2015! Like last year, LVBots members will be showcasing their robotics and electronics creations, Pololu will be giving tours of our manufacturing and other operations, and you can present your company or your projects. We will provide pizza. Registration and other details are on the LVBots Meetup page.

LVBots held a looped maze solving competition at Pololu on August 7th. It worked a lot like the maze solving competition we held in May, except we advanced to a maze that had loops. Adding loops might not seem like much, but it makes solving mazes fundamentally more challenging. Instead of being able to follow a simple strategy like always turning left, the robots need to keep track of where they are in the maze in order to find an efficient path through it. The video shows the robot runs superimposed, making them easy to compare.

Robots based on the 3pi once again dominated. Ben’s 3pi: Ghost has an especially fun provenance: it is serial number 0J17, which is a very early production unit that David gave to Kevin for his birthday back before Kevin worked at Pololu. Ben’s ridiculously optimized/calibrated code from many years ago somehow worked only on our earliest 3pis, which had motor brackets that we painstakingly injection molded by hand and 3D printed wheels and ball casters. Now that he has kids, Ben doesn’t have as much time for hours of fine tuning, so his era of dominance will likely come to an end as soon as he runs out of access to ancient 3pis.

On May 29, LVBots held a maze solving competition at Pololu. The goal in maze solving is to get from the start to the finish in the shortest time. Contestants had four tries to solve the maze. The first run is typically in a learning mode where the robot goes slowly and explores the maze. On subsequent runs, the robots would attempt the shortest path, and the best robots had progressively more aggressive speeds.

I would have liked to see one of the custom-built robots win, but despite their best attempts, none of the other competitors were able to beat a stock 3pi robot running Ben’s maze solving code from six years ago. The old video below demonstrates how the 3pi solves a maze and also describes how the course is built.

This year, we tried to hone our rules about robots cutting corners of the maze. No robot will follow the line perfectly, so we have to allow some corner-cutting, but we do not want to make it so lax that the robot could dead reckon directly to the finish. After a lot of debate, we settled on two rules:

It was exciting to see Paul’s robot, Dr. Maze, use dead reckoning to cut the corners. Paul was hoping to get away from line following and rely on encoders to navigate the maze. Unfortunately, this caused the robot to get lost on the long straightaway and fail to solve the maze. Dr. Maze exhibits its corner-cutting skills at the end of the first video. 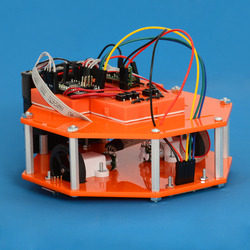 Footage from quadcopter at LVBots

This aerial video was filmed at an LVBots meeting on a DJI Phantom 2 quadcopter.

LVBots is a robotics club that has been meeting at the Pololu office in Las Vegas, Nevada for almost ten years. Our meetings are open to all ages and skill levels, and everyone is encouraged to bring their projects to share – even projects that are not capable of flying hundreds of feet into the air. Do you live in the area, or are you passing through? Check out our schedule and join us! 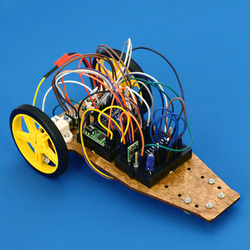 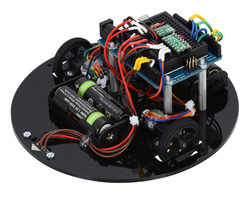 This post is about my first-place entry in the 2014 LVBots Dead Reckoning Competition, a 150 mm round robot named paul-dead-reckoning2.88ec5df. I designed this robot to be similar to the 3pi, but larger, to leave plenty of room for wiring and sensor mounting. The central controller is an Arduino Leonardo, and (unlike the 3pi), the motors are equipped with quadrature encoders. Continued…

Like several of the other engineers here at Pololu, I made a robot to compete in the LVBots Dead Reckoning Competition that took place recently. This post describes my robot, Tryangle, and the decisions that went into making it. For more information about what dead reckoning is and how it is judged, see the LVBots dead reckoning rules. Continued… 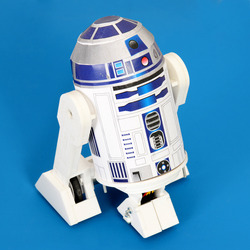 When I first started planning a robot for the recent LVBots dead reckoning competition, it was more or less a conventional design—a flat chassis with motors and circuit boards attached to the top and bottom—and I lost interest in it quickly because it felt like I was just reinventing the 3pi. I looked for a way to make the shape of the robot unique, and I noticed that the three-legged shape of R2-D2, the famous astromech droid from Star Wars, might be a good fit for a typical undercarriage composed of a ball caster and two wheels. The result of continuing along this line of investigation is my dead reckoning robot, R2-DR (you can probably guess what DR stands for). Continued… 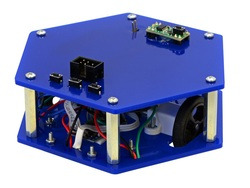 For the recent LVBots dead reckoning competition that was hosted here at Pololu, I decided to make a robot based on the Baby Orangutan robot controller. This post details my robot and some of the considerations made while I went through my design process. If you would like more details about the competition rules and how it was judged, see the LVBots dead reckoning rules (23k pdf).

I started by choosing my parts and making sure that my robot, which would later be named “Baby Blues”, would be able to function in the way I wanted. I decided on using the Baby Orangutan because of its integrated motor driver and compact size. Continued…