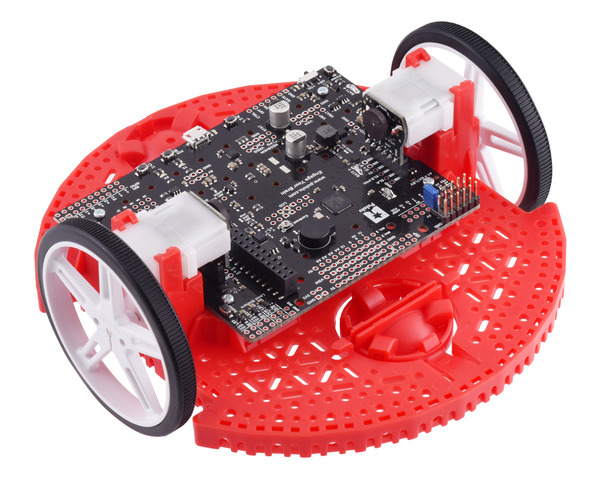 This robot based on the Romi chassis and 32U4 control board provides a platform that FRC (FIRST Robotics Competition) students can program using the full suite and libraries that are used to program competition robots, making it a great teaching tool and introductory competition robot. No soldering or tools are required to assemble this kit; the parts all just press or snap together. Just add a Raspberry Pi (not included) to the built-in control board socket to complete the robot. Once set up, the Raspberry Pi acts as a wireless intermediary between a computer running the FIRST software and the Romi control board, sending motor commands from the computer to the robot over Wi-Fi and reporting robot sensor values back to the computer.

The Romi Robot for FIRST is a robot base selected by the WPILib team for use by FRC teams preparing for competitions. This kit is intended for use with a Raspberry Pi (not included) and additional software maintained by WPILib. After completing the kit, students can control the Romi Robot with the same FIRST software and libraries that are used to program their competition robots, enabling them to refine their programs in the real world while their competition robots are still under construction. Please note that Pololu is not directly affiliated with FIRST, and we cannot provide support for using this product with FIRST software or libraries. For more information on using this robot with the FIRST software, see the WPILib Romi Robot documentation.

This kit consists of the following products, most of which are also available for purchase separately as replacements:

Note: This kit does not include a Raspberry Pi, which is required to complete the Romi Robot for FIRST. The control board features a user-programmable ATmega32U4 microcontroller that is preloaded with an Arduino-compatible bootloader and can serve as the main controller for this robot, but the FIRST software will only work if a Raspberry Pi model 3B+ or 4B+ is present.

This kit does not require any soldering, but it does require assembly. All of the included pieces press or snap together, so no tools are required for this process. (Note: you will need a Phillips head screwdriver to screw a Raspberry Pi down to the included standoffs.) The Romi base plate ships with the control board pre-installed. The kit picture above shows two double battery terminals as included components, but please note that these might be already installed in the base plate battery compartment. This short video gives a quick overview of how the chassis components go together:

For more detailed assembly instructions, see the assembly section of the Romi Chassis User’s Guide. Several steps are already completed on this kit, including the first few, so you will be able to skip those.

Basic information about the Romi 32U4 Control Board

The Romi 32U4 Control Board is built around a USB-enabled ATmega32U4 AVR microcontroller from Microchip (formerly Atmel), and it ships preloaded with an Arduino-compatible bootloader. The control board features two H-bridge motor drivers and is designed to connect to the encoders on the included motors to allow closed-loop motor control. It also includes a powerful 5 V switching step-down regulator that can supply up to 2 A continuously, along with a versatile power switching and distribution circuit. A 3-axis accelerometer and gyro enable a Romi 32U4 robot to make inertial measurements, estimate its orientation, and detect external forces. Three on-board pushbuttons offer a convenient interface for user input, while indicator LEDs, a buzzer, and a connector for an optional LCD allow the robot to provide feedback.

The Romi 32U4 Control Board can be used either as a standalone control solution or as a base for a more powerful Raspberry Pi controller. Its on-board connector and mounting holes allow a compatible Raspberry Pi (Model B+ or newer, including Pi 3 Model B+ and Model A+) to plug directly into the control board. Integrated level shifters make it easy to set up I²C communication and interface other signals between the two controllers, and the control board automatically supplies 5 V power to an attached Raspberry Pi. In this setup, the Raspberry Pi can handle the high-level robot control while relying on the Romi 32U4 Control Board for low-level tasks, like running motors, reading encoders, and interfacing with other analog or timing-sensitive devices.

For more information, see the Romi 32U4 Control Board User’s Guide.

There are a variety of accessories available for the Romi platform that could work with the Romi Robot for FIRST, but integrating them would require additional tools and skills (e.g. soldering). Additionally, we are not involved with the FIRST software side of this project, so we do not know what might be required to get that to support additional sensors and other electronics.