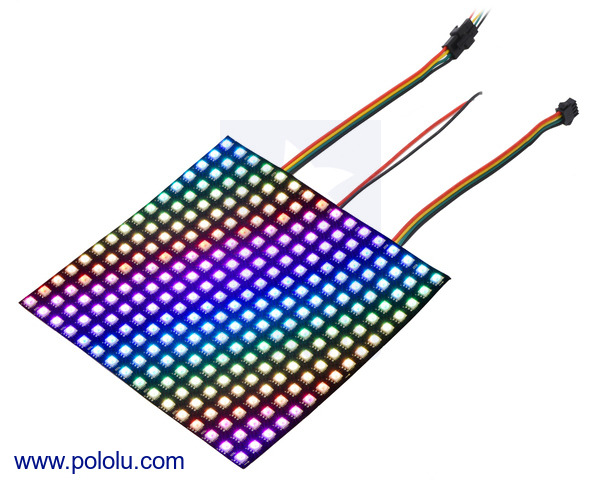 This flexible LED panel contains 256 RGB LEDs arranged in a 16×16 grid. The LEDs can be individually addressed using an easy-to-control SPI interface, allowing you full control over the color of each RGB LED. The panel runs on 5 V and can be chained with additional SK9822 LEDs.

These flexible RGB LED panels based on the SK9822 LED/driver IC are an easy way to add complex lighting effects to a project. Each SK9822 LED has an integrated driver that allows you to control the color and brightness of each LED. The SK9822 has constant current control, so voltage drops caused by the resistance in long power connections have little effect on the SK9822’s color and brightness as long as the voltage stays above 3.5 V. The panels can be chained together and can be chained to other SK9822-based products such as our SK9822-Based LED Strips.

These SK9822-based LED panels work as a drop-in replacement for our older APA102C-based panels in many applications. However, due to color differences, we do not recommend using the SK9822 and APA102C together in the same project. Also, due to a slight difference in the protocol, you might have to update your code to handle the SK9822. See below for a more detailed comparison of the SK9822 and APA102C.

Warning: These LED panels can draw a lot of current and overheat if they are operated at full brightness, so we recommend limiting the brightness. See the “Current draw” section below for more information.

The output connector is designed to mate with the input connector of another SK9822 LED product to allow the panel to be chained to it. The black wire is ground, the green wire is the data output (DOU), the yellow wire is the clock output (COU), and the red wire is the power line.

Each SK9822 LED draws approximately 50 mA with red, green, and blue at full brightness, and has a maximum operating temperature of 80°C. These LED panels can draw a significant amount of current and overheat if they are operated at their full brightness, so we recommend limiting the brightness of the colors you send to the panel. Alternatively, you can take other measures to reduce the power drawn by the LED panel. For example, limiting the number of LEDs that are on at the same time and limiting how long the LEDs are on can help reduce the power drawn and keep the panel from overheating.

The SK9822 has built-in constant current control. For any given color command, the SK6812’s actual color and brightness are largely independent of its supply voltage as long as the voltage is between 3.5 V and 5 V. This means that voltage drops caused by the resistance in long power connections are less likely to affect the color or brightness of the light emitted.

One option for making a custom cable is to cut off the unused output connector on the last LED panel in your chain. This can then be plugged into the input connector of the first LED panel. The wires on the output and input connectors are 20 AWG, which is too thick to easily use with our crimp pins and housings, but you could solder the wires to header pins.

These LED panels are controlled through an SPI protocol on the data and clock input lines. The protocol is documented in the SK9822 datasheet (476k pdf), but we describe it below with some modifications that we have found to work better.

The default, idle state of the clock signal line is low, and the data signal is read on each rising edge of the clock. To update the LED colors, you need to toggle the clock line while driving the data line with the value of each bit to send; this can be done through software (bit-banging), or it can be handled by a hardware SPI peripheral in a microcontroller. There is no minimum clock frequency, although using a lower frequency means that it will take longer to update the entire sequence of LEDs (especially when controlling a large number of LEDs), so you will probably want to use the fastest practical clock speed to get the best update rate.

The data for each LED is encoded as a sequence of 32 bits (4 bytes) called an LED frame. The first 3 bits of the LED frame should be ‘1’. The next 5 bits are a “global” brightness value (0–31) that is applied to all three color channels. The remaining 24 bits are the color values, in BGR (blue-green-red) order. Each color value uses 8 bits (0–255). The most significant bit of each value is transmitted first. The first LED frame transmitted applies to the LED in the corner closest to the data input connector, while the second color transmitted applies to the next LED in the panel as indicated by the arrows, and so on.

The SK9822 datasheet recommends that the end frame be composed of 32 ‘1’ bits, but we have found this does not work reliably in certain situations and can sometimes lead to glitches. This can be avoided by using an end frame that consists of at least ``(n – 1)`` extra clock edges, where ``n`` is the number of LEDs, with ‘0’ on the data line. It is often easiest to round up to a multiple of 16 clock edges so that you are counting bytes instead (there are 2 clock edges in a bit and 8 bits in a byte); you would therefore send ``((n – 1) // 16)`` bytes (rounded up to the next whole number). For a more detailed explanation, see the comments in the source code of our Arduino library, discussed below.

Each RGB LED receives data on its data input line and passes data on to the next LED using its data output line. The update rate is generally limited only by the speed of the controller; our Arduino library below can update 60 LEDs in about 1.40 milliseconds, so it is possible to update 700 LEDs at 60 Hz. However, constant updates are not necessary; the LED strip can hold its state indefinitely as long as power remains connected.

Note: The minimum logic high threshold for the data and clock signals is not specified in the SK9822 datasheet, so you should consider using level shifters if you want to control these strips from 3.3 V systems. In our tests, we were able to control the LEDs directly with 3.3 V signals, but that is not guaranteed to always work.

To help you get started quickly, we provide an APA102 Arduino library. Our APA102 library supports both the SK9822 and the APA102 (an LED/driver IC that has a nearly identical interface). The library also works with our Arduino-compatible A-Star modules.

Additionally, the DotStar Arduino library and Raspberry Pi Python module from Adafruit should work with these strips since the DotStars are based on similar LEDs. The FastLED Arduino library is another option that focuses on performance and provides advanced functionality like color correction.

The SK9822 is very similar to the APA102C used in some of our older LED products, and can be used as a drop-in replacement in almost any application. LED products based on the SK9822 and APA102C can be chained together.

The SK9822 has voltage-independent brightness over a wide voltage range, as described in the “Current draw” section, which means that the colors of the LEDs should not be affected by a drop in the supply voltage as much as they are on the APA102C.

The SK9822 can be distinguished from the APA102C by visual inspection. The pictures below show what each IC looks like: