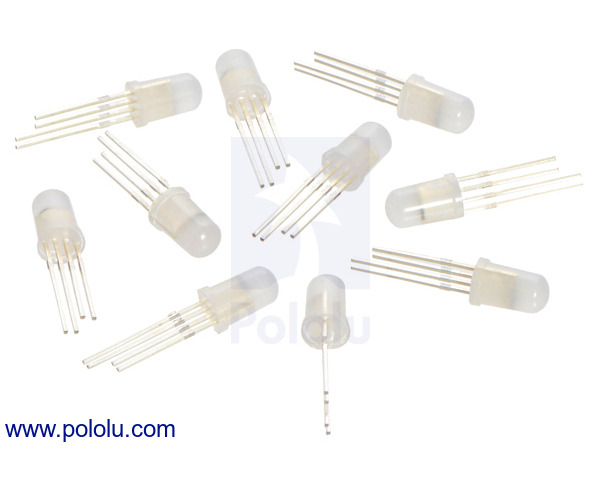 This 10-pack of 5 mm through-hole RGB LEDs offers an easy way to add colorful and complex lighting effects to a project. Each diffused LED features an integrated WS2811 driver that operates at 5 V and is controlled through a high-speed one-wire digital interface that allows multiple LEDs to be connected together to form a chain of addressable RGB LEDs.

These LED 10-packs are an easy way to add colorful and complex lighting effects to a project. Each RGB LED contains an integrated WS2811 driver that allows it to be controlled with a high-speed one-wire interface (see the bottom of this page for sample code, including an Arduino library for controlling these LEDs). Multiple LEDs can be connected together to form a chain of RGB LEDs, and the entire chain can be controlled from a single microcontroller pin. These are very similar to the LEDs in our addressable RGB LED strips, but with these discrete LEDs you have far more flexibility in how they are arranged. The picture on the right shows a chain of 10 LEDs in a breadboard controlled by an A-Star 32U4 Micro.

The LED has 4 pins, as shown in the diagram below:

The pins can be identified by the length of the leads or by looking for the flat side of the LED.

The DIN pin is the input signal pin. The DIN pin of the first LED in the chain should be connected to an I/O line of a microcontroller.

The 5V pin supplies power to the LED, and should be connected to a suitable 5 V power supply. The power supply should be capable of supplying enough current for all the LEDs it is powering. Each LED draws approximately 50 mA with all three channels at full brightness.

The GND pin should be connected to the ground pin of the microcontroller that is controlling the LEDs and also the negative terminal of the power supply.

The DOUT pin is optional and allows you to chain multiple LEDs together. It can be connected directly to the DIN pin of the next LED in the chain.

We recommend taking several precautions to protect these LEDs from damage:

Warning: These LEDs can explode if they are pushed beyond their limits. For example, we were able to make an 8 mm LED explode by powering at 6 V and setting it to full brightness for about a minute (though we could not subsequently replicate that result). We strongly recommend you avoid powering these LEDs at voltages over 5 V.

After power is applied to these LEDs, they will emit bright blue light until the first color command is received.

These LEDs can be chained with each other and also with other LED products that have a similar protocol. In particular, they can be chained with any of our SK6812/WS281x-Based Addressable RGB LEDs. Even though these LEDs use a different color ordering than the WS2812B (RGB instead of GRB), they can still be chained to WS2812B-based products.

These LEDs are controlled by a simple, high-speed one-wire protocol on the input signal line. The protocol is documented below.

To update all the LEDs in the chain, you should send all the colors at once with no pauses. If you send fewer colors than the number of LEDs in the chain, then some LEDs near the end will not be updated. For example, to update 10 LEDs wired in a chain, you would send 240 bits encoded as high pulses and then hold the signal line low for 50 μs.

The high-speed protocol of the driver allows for fast updates; our library for the Arduino below takes about 1.1 ms to update 30 LEDs. However, constant updates are not necessary; the LED can hold its state indefinitely as long as power remains connected.

Since this LED does not use a standard protocol, a software bit-banging approach is usually needed to control it from a microcontroller. Because of the sub-microsecond timing, the bit-banging code generally needs to be written in assembly or very carefully optimized C, and interrupts will need to be disabled while sending data to the LEDs. If the interrupts in your code are fast enough, they can be enabled during periods where the signal line is low. It is generally not possible to generate the required control signals directly from older, slower microcontroller boards, like the Basic Stamp, or from processors that run full operating systems and can experience multithreading delays, like the Raspberry Pi.

Additionally, the Adafruit NeoPixel library for Arduino should work with these LEDs since the NeoPixels are based on the similar WS2812B driver.