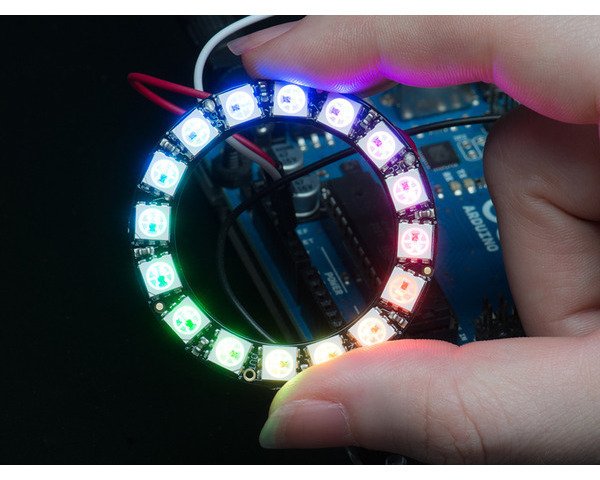 This Adafruit NeoPixel ring contains 16 individually addressable RGB LEDs arranged in a closely spaced circle that can all be controlled with a single digital output of a microcontroller. The ring has a 1.75″ (44.5 mm) outer diameter, and several rings can be chained together, making them great for adding some shine to a small robot or wearable electronics project.

Compare all products in Addressable RGB LEDs Based on the SK6812/WS281x.

This NeoPixel ring from Adafruit consists of 16 individually addressable RGB LEDs that can all be controlled with a single digital output of a microcontroller and chained together with other rings and SK6812/WS281x-based LEDs to make larger, more complex displays. This small ring has a 1.75″ (44.5 mm) outer diameter and 1.25″ (31.8 mm) inner diameter.

The ring can be controlled by many microcontrollers, but our A-Star 32U4 Micro works particularly well for applications where space is an issue since it fits neatly inside the ring. The picture on the right shows an A-Star 32U4 Micro controlling three different sizes of NeoPixel rings. See the Protocol section near the bottom of this page for some things to consider when selecting an appropriate microcontroller.

The following videos from Adafruit show sample projects you can make with the 16-LED ring:

The pin labeled Power Signal Ground is the ground pin, and should be connected to the ground pin of the microcontroller that is controlling the LEDs and also to the negative terminal of the power supply. The version of this product shipped by Pololu after September 10, 2014 include a second ground pin close to the first.

The pin labeled Power 5V DC is the power input pin, and should be connected to a suitable power supply. An input voltage of 5 V is used to power the ring, and each LED on the ring can draw up to 50 mA at 5 V when outputting white at full brightness. That means the ring could draw up to a maximum of around 800 mA.

The pin labeled Data Input is an input that receives the signal controlling the LEDs. This pin should be connected to a microcontroller output pin or to the signal output pin of a SK6812/WS281x-based LED product.

The pin labeled Data Out is optional. It can be connected to the data input pin of another SK6812/WS281x-based LED product in order to form a chain.

Our 0.1″ header pins could be used to connect to the ring’s four pins, or wires could be soldered directly to the board. The ring does not ship with any header pins or connectors.

NeoPixels can be easily damaged if proper precautions are not taken when using them. In general, for SK6812/WS2812B-based products, we suggest adding a capacitor of at least 10 μF between the ground and power lines and a 100 Ω to 1000 Ω resistor between your microcontroller and the signal input pin. More details on best practices when using NeoPixel products can be found in the Adafruit NeoPixel Uberguide.

The NeoPixels are controlled by a simple, high-speed one-wire protocol that requires sub-microsecond timing. The details of this protocol are explained in the Adafruit NeoPixel Uberguide. It is generally not possible to generate the required control signals directly from older, slower microcontroller boards, like the Basic Stamp, or from processors that run full operating systems and can experience multithreading delays, like the Raspberry Pi.

These example libraries should help you quickly give your project some shine:

This product may ship with either WS2812B- or SK6812-based LEDs. They are have the same interface and color order and can generally be used interchangeably or chained together. This product is Adafruit product ID 1463.