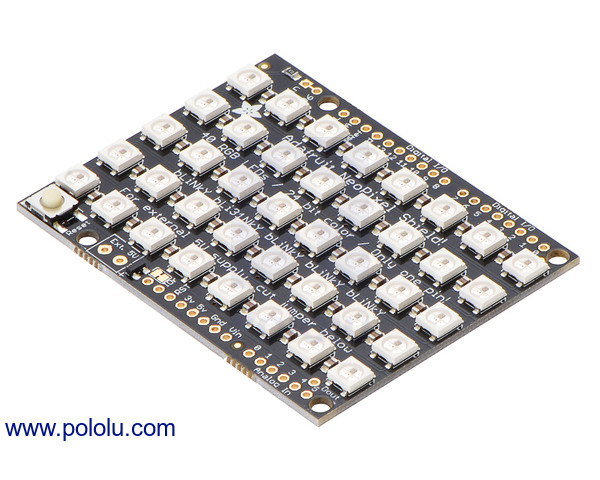 The Adafruit NeoPixel Shield for Arduino contains 40 individually addressable RGB LEDs arranged in a 5×8 matrix, and only a single (customizable) Arduino pin is required to control them all. Multiple NeoPixel Shields can also be chained together to create larger arrays.

This Arduino shield from Adafruit contains 40 individually addressable RGB LEDs arranged in a 5×8 matrix, and it only takes one pin to control them all (pin 6 by default, but this can be customized by cutting a trace and adding a jumper to a different Arduino pin). Additionally, multiple NeoPixel Shields can be chained together by connecting the first shield’s DOUT pin to the second shield’s DIN pin. This results in a larger NeoPixel matrix that can still be controlled from a single Arduino pin.

The LEDs are powered by default from the Arduino’s regulated 5 V rail, which is sufficient for powering about a third of the LEDs at full brightness at the same time. If you need more power than this, you can cut a trace and use an external 4 V to 6 V supply to power the shield, but note that these LEDs can get quite bright, so you will probably want to avoid setting them to full brightness unless you have some kind of eye protection or a good diffuser in front of them. See the Powering the shield section below for more information.

See the NeoPixel Shield section of the Adafruit Shield Compatibility Guide for a list of tested and fully compatible Arduino boards. This shield is also compatible with the A-Star 32U4 Prime.

For more detailed documentation and resources to help you use the NeoPixel Shield, see the Adafruit NeoPixel Uberguide.

Note: The example code for our Arduino library for addressable RGB LED strips does not take any precautions to limit current draw. If you want to use these examples, be sure you are powering the NeoPixels from an appropriate power supply. See the “Powering the shield” section below for more information.

By default, the board is configured to be powered from the Arduino 5 V supply. However, since the 40 RGB LEDs can draw upwards of 2.2 A (at full brightness), it should not be used in this default power configuration unless you take precautions against drawing more current than the Arduino’s on-board regulator can handle. This problem can be avoided by cutting a trace on the shield and supplying 5 V to the pins labeled “Ext. 5V” from an appropriate external power supply. An included 2-pin terminal block can optionally be soldered to these pins to make this modification easier. The external power pins feature reverse-voltage protection. Some Arduino boards (such as the Arduino Uno R3), have space for the NeoPixel Shield’s terminal block to be soldered to the bottom of the shield, which helps prevent it from distracting from the LEDs.

This product may ship with either WS2812B- or SK6812-based LEDs. They are have the same interface and color order and can generally be used interchangeably or chained together. This product is Adafruit product ID 1430.