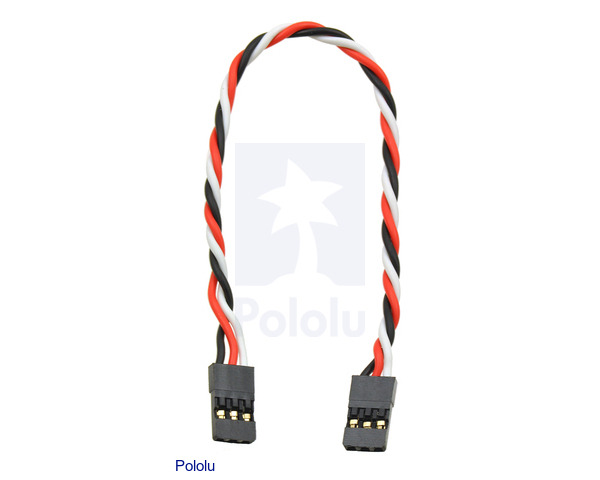 This 6-inch (150-mm), twisted cable has 22-AWG wires and female “JR”-style connectors on both ends, the same kind of connector commonly found on RC hobby servos. It can be used to make connections between devices with 0.1" 3-pin male headers, such as between RC servo controllers or RC receivers and motor controllers with an RC interface. It can also be a convenient way to connect various 3-pin sensors to a robot controller. The cable’s conductors each consist of 60 strands, making it much more flexible than standard servo cables, and the wires are twisted to reduce electromagnetic interference (EMI).

This servo extension cable has female JR connectors on both ends, so it can be used to make connections between devices with 0.1" 3-pin male headers, such as between RC servo controllers or RC receivers and motor controllers with an RC interface. The cable’s connectors are commonly found on RC servo leads and work with both male JR and male Futaba J connectors. They have gold-flashed contacts on a 0.1" spacing and are joined by 22-AWG, 60-strand wires that make this cable more flexible than standard servo cables.

These female-to-female cables are available in two styles: flat, with wires stuck together side by side, and twisted, with wires twisted around each other to decrease electromagnetic interference (EMI). The twisted versions are especially soft and flexible. These cables are also available in three lengths: 6", 12", and 24".

Note: Cable color may vary from what is shown in the product picture. Possible color combinations are black, red, and white or brown, red, and orange.