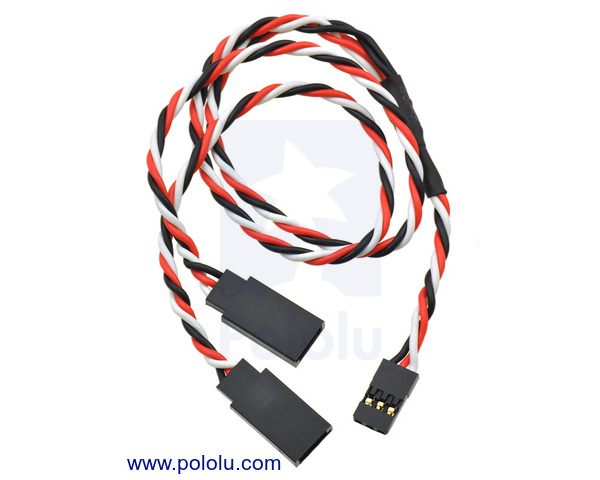 This 12-inch (300-mm), twisted Y-cable is typically used to connect two servos to a single servo port . It has 22-AWG wires terminated on one end by a “JR”-style female connector and on the other by two Futaba J male connectors, allowing it to work in either system or as an adapter between systems. The split occurs close to the cable’s JR input, so the two male ends can be separated by up to approximately 18" (450 mm). The cable’s conductors each consist of 60 strands, making it much more flexible than standard servo cables, and the wires are twisted to reduce electromagnetic interference (EMI).

This 12" (300 mm) Y-cable is typically used to connect two servos to a single servo port on an RC receiver or servo controller. It has a single female JR connector connected to two male Futaba J connectors, all of which have gold-flashed contacts on a 0.1" spacing. Since a female JR connector can be plugged into a male Futaba J connector, each end of the cable is compatible with both Futaba and JR-style connections, which means this cable will work in either system or as an adapter between systems, and it is compatible with almost all of the RC servos we sell (you can assume our servos have female JR connectors unless the servo’s product page specifically says otherwise). Each 22-AWG wire is comprised of 60 strands, making this cable more flexible than standard servo cables.

The split occurs close to the single (input) end of the cable, allowing the two male output ends to achieve a maximum separation of approximately 18" (450 mm).

These female-to-2x-male cables are available in two styles: flat, with wires stuck together side by side, and twisted, with wires twisted around each other to decrease electromagnetic interference (EMI). The twisted versions are especially soft and flexible.