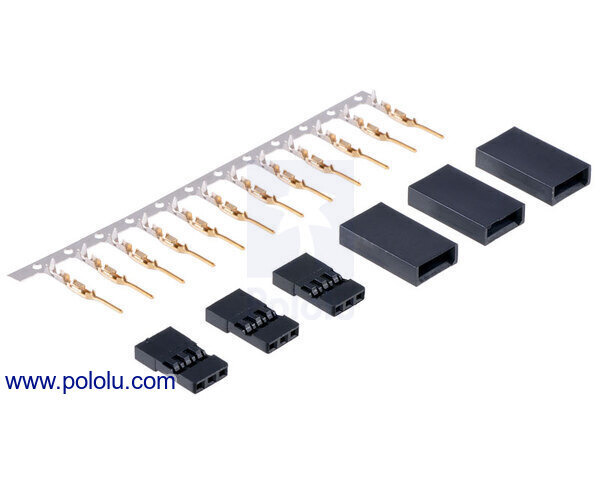 This pack contains everything you need to add up to three male JR connectors — the connectors that mate with those commonly found on generic RC servos — to custom cables. You can use a crimping tool to attach the included pins to your own 22–26 AWG wires. This pack contains enough housings and crimp pins (including 3 spare pins) for 3 male connectors. The crimp pins have gold-flashed male contacts.

Compare all products in Connectors or

This JR connector has a 0.1" pin spacing and mates with the female JR connectors commonly found on RC servos. The corresponding female JR connector has two corners that are slightly beveled, which makes it difficult (but not impossible) to incorrectly plug them into this connector. This pack contains three female JR housings, three male JR shrouds, and twelve gold-flashed crimp pins, which is enough for three complete male connectors and three spare pins. The crimp pins are designed for 22–26 AWG wires, and we sell a crimping tool that works well with them. You can use these connectors to make your own custom servo cables or servo extension cables.

To assemble the connectors, push the crimped male pins into the female housing until you hear them lock into place (the prongs will protrude out of the connector sockets), and then slide that assembly into the shroud. If you look inside the shroud, you will see a raised bump closer to one of the two openings; this is the opening into which you should plug the connector subassembly, and you should plug the assembly in so that the side of the female housing with the crimp pin latches faces the side of the shroud with the bump. If you have done things right, you will hear a snap when you push the female housing into the shroud, and it will lock in place. Note that If you want a cable that you can plug into a breadboard rather than a female JR connector, you can leave the shroud off.

We also sell Futaba J connectors, which are very similar but have an additional polarizing tab/slot, and we carry an variety of premade servo extension and splitter cables.

Note: these connectors are commonly referred to as “female” in the RC hobby industry, so please look carefully at the pictures of male JR connectors below to make sure they are what you want.