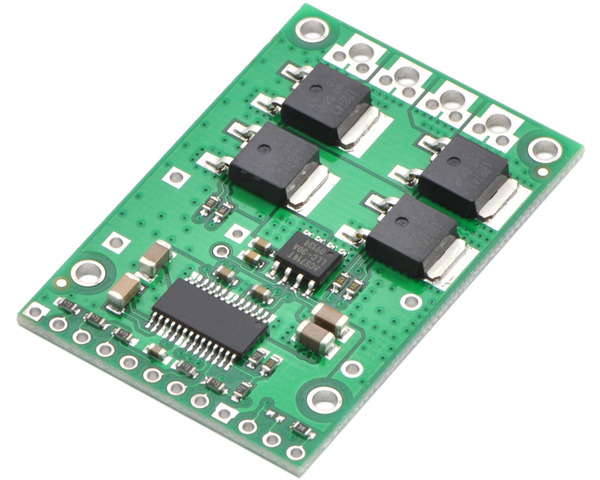 This discrete MOSFET H-bridge motor driver enables bidirectional control of one high-power DC brushed motor. The compact 1.8×1.2-inch board supports a wide 5.5 to 40 V voltage range and is efficient enough to deliver a continuous 23 A without a heat sink. This version outputs an analog voltage proportional to the motor current, and an extra control input allows for coasting in addition to the driving and braking offered by the other Pololu high-power motor drivers.

New version available! We have released a second-generation version of this motor driver, the Pololu G2 High-Power Motor Driver 24v21, that can deliver almost as much output power despite its much smaller size. The new version also has basic current sensing functionality and optional current limiting to a configurable threshold that could be enough to replace a dedicated current sensor in some applications.

The Pololu high-power motor driver is a discrete MOSFET H-bridge designed to drive large DC brushed motors. The H-bridge is made up of one N-channel MOSFET per leg, and most of the board’s performance is determined by these MOSFETs (the rest of the board contains the circuitry to take user inputs and control the MOSFETs). The MOSFET datasheet is available under the “Resources” tab. The MOSFETs have an absolute maximum voltage rating of 40 V; higher voltages can permanently destroy the motor driver. Under normal operating conditions, ripple voltage on the supply line can raise the maximum voltage to more than the average or intended voltage, so a safe maximum voltage is approximately 34 V.

Note: Charged battery voltages can be much higher than nominal voltages, so the maximum nominal battery voltage we recommend is 28 V unless appropriate measures are taken to limit the peak voltage.

The versatility of this driver makes it suitable for a large range of currents and voltages: it can deliver up to 23 A of continuous current with a board size of only 1.8" by 1.2" and no required heat sink. With the addition of a heat sink, it can drive a motor with up to about 37 A of continuous current. The module offers a simple interface that requires as few as two I/O lines while allowing for both sign-magnitude and locked-antiphase operation, and an optional third control input unique to this board allows for coasting. This board also features a current-sensing circuit that measures bidirectional motor current with a magnitude up to 30 A and outputs an analog voltage.

Integrated detection of various short-circuit conditions protects against common causes of catastrophic failure; however, please note that the board does not include reverse power protection or any over-current or over-temperature protection. We recommend you use the integrated current sensor to keep the driver from delivering more current than it can safely handle.

The motor and motor power connections are on one side of the board, and the control connections (5V logic) are on the other side. The motor supply should be capable of delivering the high current the motor will require, and a large capacitor should be installed between V+ and ground close to the motor driver to decrease electrical noise. Two axial capacitors are included and one or both can be installed by soldering them into the V+ and GND pins (labeled '+' and '-' on the bottom silkscreen) along the long edges of the board. Such installations are compact but might limit heat sinking options; also, depending on the power supply quality and motor characteristics, a larger capacitor might be required. There are two options for connecting to the high-power signals (V+, OUTA, OUTB, GND): large holes on 0.2" centers, which are compatible with the included terminal blocks, and pairs of 0.1"-spaced holes that can be used with perfboards, breadboards, and 0.1" connectors.

The logic connections are designed to interface with 5V systems (5.5 V max); the minimum high input signal threshold is 3.5 V, so we do not recommend connecting this device directly to a 3.3 V controller. In a typical configuration, only PWMH and DIR are required, but PWML can be used to enable coasting if both PWML and PWMH are driven low. PWML is pulled high and PWMH is pulled low internally. The two fault flag pins (FF1 and FF2) can be monitored to detect problems (see the Fault Flag Table below for more details). The RESET pin is pulled up to V+ through a 20 kΩ resistor. When held low, it puts the driver into a low-power sleep mode and clears any latched fault flags. The V+ pin on the logic side of the board gives you access to monitor the motor’s power supply or pass it on to low-current devices (it should not be used for high current). The board also provides a regulated 5V pin which can provide a few milliamps (this is typically insufficient for a whole control circuit but can be useful as a reference or for very low-power microcontrollers). This pin can be shorted to VCS to power the current sensor, or VCS can be supplied with 5 V externally. If the 5V output pin is used to power VCS, it should not be used for any other purpose as the current sensor will draw close to the limit of the current the 5V pin can supply. When the current sensor is powered by applying 5 V to VCS, the CS pin outputs 66 mV/A for currents between -30 and 30 A centered at 2.5 V (typical error is less than 1.5%).

A 20-pin straight breakaway male header, two 100 uF capacitors, and two 2-pin 5mm terminal blocks are included with each motor driver. (Note: The terminals blocks are only rated for 15 A; for higher power applications, use thick wires soldered directly to the board.) Connecting large capacitors across the power supply is recommended; one way to do it is between the '+' and '-' holes, as shown below. The four mounting holes are intended to be used with #2 screws (not included).

The motor driver can be used in several different modes:

The motor driver can tolerate peak currents in excess of 200 A. The peak current ratings are for quick transients (e.g. when a motor is first turned on), and the continuous rating of 23 A is dependent on various conditions, such as the ambient temperature. The main limitation comes from heating and power dissipation; therefore, at high currents, the motor driver will be extremely hot, and performance can be improved by adding heat sinks or otherwise cooling the board. The driver’s printed circuit board is designed to draw heat out of the MOSFETs, but performance can be improved by adding a heat sink. The MOSFETs have a theoretical maximum continuous current of 90A at 25°C, but dissipating enough heat to keep the MOSFET at this temperature is impractical for most applications; close to 40 A of continuous current should be achievable without too extravagant of a heat sink. For more information on power dissipation see the data sheet for the MOSFETs on the Resources tab.

Because there is no internal temperature limiting on the motor driver, the entire system should be designed to keep the load current below the 23 A limit. An easy way to achieve this is to select a motor with a stall current below that limit. However, because a good motor can have stall currents dozens of times higher than the typical operating current, motors with stall currents that are hundreds of amps can be used with this driver as long as the running current is kept low. For example, a motor with a 100 A stall current might run well at 10 A, leaving a safe margin for the current to double for several minutes at a time or to triple for several seconds. If the motor does stall completely for a prolonged period, however, the motor or driver are likely to burn out.

Warning: This motor driver has no over-current or over-temperature shut-off. Either condition can cause permanent damage to the motor driver. We recommend you use the current-sense output CS to monitor your current draw if your application will put the driver close to its limits of operation.