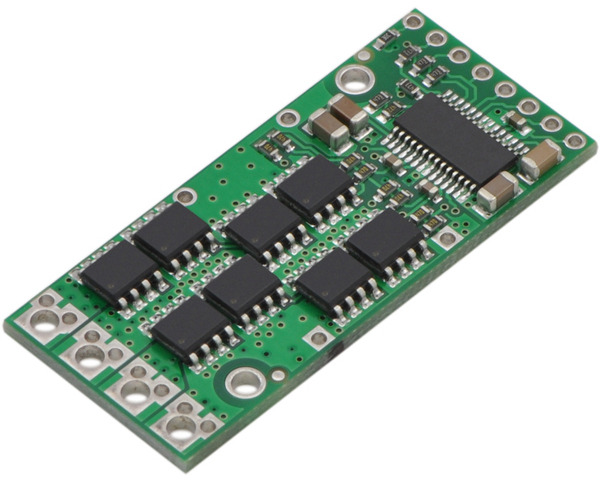 This discrete MOSFET H-bridge motor driver enables bidirectional control of one high-power DC brushed motor. The little 1.8×0.8-inch board supports a wide 5.5 to 40 V voltage range and is efficient enough to deliver a continuous 20 A without a heat sink.

New version available! We have released a second-generation version of this motor driver, the Pololu G2 High-Power Motor Driver 24v21, that can be used as a near drop-in replacement for this older driver despite its much smaller size and is better in almost every way. See the section at the bottom of the G2 product page for a complete list of the differences.

This older design has been discontinued and is now only available by large-volume special order. Please contact us for more information.

The Pololu high-power motor driver is a discrete MOSFET H-bridge designed to drive large DC brushed motors. The H-bridge is made up of two N-channel MOSFET per leg, and most of the board’s performance is determined by these MOSFETs (the rest of the board contains the circuitry to take user inputs and control the MOSFETs). The MOSFET datasheet is available under the “Resources” tab. The MOSFETs have an absolute maximum voltage rating of 40 V, and higher voltages can permanently destroy the motor driver. Under normal operating conditions, ripple voltage on the supply line can raise the maximum voltage to more than the average or intended voltage, so a safe maximum voltage is approximately 34 V.

Note: Charged battery voltages can be much higher than nominal voltages, so the maximum nominal battery voltage we recommend is 28 V unless appropriate measures are taken to limit the peak voltage.

The versatility of this driver makes it suitable for a large range of currents and voltages: it can deliver up to 20 A of continuous current with a board size of only 1.8" by 0.8" and no required heat sink. With the addition of a heat sink, it can drive a motor with up to about 28 A of continuous current. The module offers a simple interface that requires as little as two I/O lines while allowing for both sign-magnitude and locked-antiphase operation. Integrated detection of various short-circuit conditions protects against common causes of catastrophic failure; however, please note that the board does not include reverse power protection or any over-current or over-temperature protection.

A 16-pin straight breakaway male header, two 100 uF capacitors, and two 2-pin 5mm terminal blocks are included with each motor driver. (Note: The terminals blocks are only rated for 15 A; for higher power applications, use thick wires soldered directly to the board.) Connecting large capacitors across the power supply is recommended; one way to do it is between the '+' and '-' holes, as shown below. The two mounting holes are intended to be used with #2 screws (not included).

The motor driver can tolerate peak currents in excess of 200 A. The peak current ratings are for quick transients (e.g. when a motor is first turned on), and the continuous rating of 25 A is dependent on various conditions, such as the ambient temperature. The main limitation comes from heating and power dissipation; therefore, at high currents, the motor driver will be extremely hot, and performance can be improved by adding heat sinks or otherwise cooling the board. The driver’s printed circuit board is designed to draw heat out of the MOSFETs, but performance can be improved by adding a heat sink. With a proper heat sink, the motor driver can deliver up to 28 A of continuous current. For more information on power dissipation see the data sheet for the MOSFETs on the Resources tab.

Because there is no internal temperature limiting on the motor driver, the entire system should be designed to keep the load current below the 20 A limit. An easy way to achieve this is to select a motor with a stall current below that limit. However, because a good motor can have stall currents dozens of times higher than the typical operating current, motors with stall currents that are hundreds of amps can be used with this driver as long as the running current is kept low. For example, a motor with a 80 A stall current might run well at 8 A, leaving a safe margin for the current to double for several minutes at a time or to triple for several seconds. If the motor does stall completely for a prolonged period, however, the motor or driver are likely to burn out.