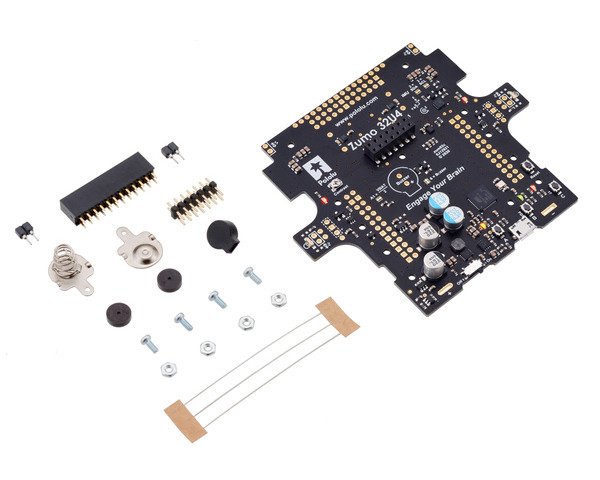 Compare all products in Original Zumo 32U4 Robot.

New version available! We have released an updated Zumo 32U4 OLED Robot that includes an OLED display with better graphical capabilities than the LCD used by the original Zumo 32U4 robot. The Zumo 32U4 OLED Main Board can be used as a replacement part for a Zumo 32U4 OLED robot, and we recommend using the newer OLED version for new custom robot builds. This original version of the main board will only be available by special order once our existing stock runs out.

This is primarily intended as a replacement part, but it can also be used to make your own Zumo 32U4 robot if you only want a subset of the parts included with our full kit. The Zumo 32U4 Robot Kit consists of the following:

This is the v1.1 revision of the Zumo 32U4 Main Board. It uses an LSM6DS33 accelerometer and gyro and an LIS3MDL magnetometer, replacing the LSM303D and L3GD20H sensors on the original Zumo 32U4 Main Board v1.0. Our Zumo 32U4 Arduino library can help you write code that will work with the inertial sensors on either revision. For more information, see the user’s guide.