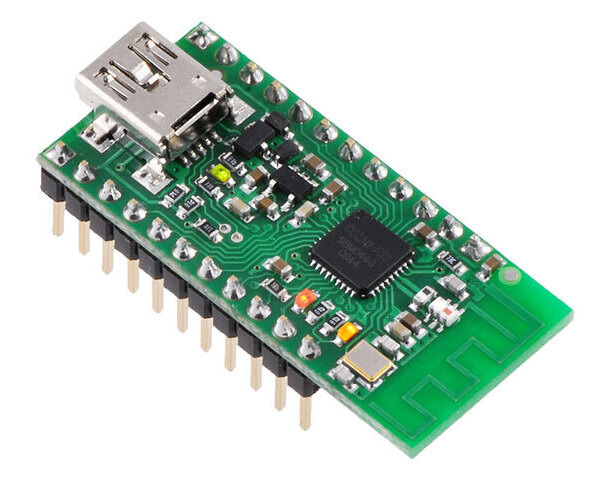 The Pololu Wixel is a general-purpose programmable module featuring a 2.4 GHz radio and USB. You can write your own software or load precompiled, open-source apps onto the TI CC2511F32 microcontroller at the heart of the Wixel, turning it into a wireless serial link, data logger, or whatever you need for your current project. With 29 KB of available flash and 4 KB of RAM, the Wixel is even suitable as the main controller for a robot or other system. This version ships with 0.1" male header pins installed as shown.

Compare all products in Wixels or

User’s manual for the Pololu Wixel.

This guide shows how the Joystick App for the Wixel can be used to convert a non-USB joystick into a USB device.

Wixel SDK Documentation
The Wixel SDK contains source code (for libraries and applications) that will help you develop your own applications for the Wixel. This SDK is included in the Wixel Development Bundle.
Pololu Wixel SDK Repository on GitHub
This is where we publish the latest Wixel SDK code and documentation, and it is the central location for sharing source code with the Wixel community.
CC2511 datasheet and technical documents
Website for the CC2510Fx/CC2511Fx microcontrollers from Texas Instruments. This includes the CC2511F32, which is used on the Wixel and features a 2.4 GHz radio transceiver, 32 KB of flash memory, and a full-speed USB interface.
SDCC – Small Device C Compiler
This is a free compiler that is used to compile the code in the Wixel SDK. This compiler is included in the Wixel Development Bundle.
Notepad++
Notepad++ is a free source code editor and Notepad replacement that supports syntax highlighting of C source files. This program is included in the Wixel Development Bundle.
Instructable: Introducing the Wixel USB Wireless Module
A customer-written Instructable that introduces the reader to the Wixel through a series of basic projects. By Michael Oz, May 2011.