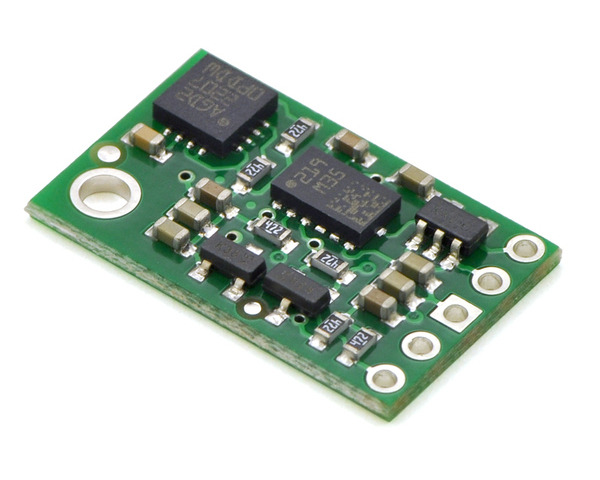 The Pololu MinIMU-9 v2 is an inertial measurement unit (IMU) that packs an L3GD20 3-axis gyro and an LSM303DLHC 3-axis accelerometer and 3-axis magnetometer onto a tiny 0.8″ × 0.5″ board. An I²C interface accesses nine independent rotation, acceleration, and magnetic measurements that can be used to calculate the sensor’s absolute orientation. The module includes a voltage regulator and a level-shifting circuit that allows operation from 2.5 to 5.5 V.

This Arduino program (sketch) allows an Arduino connected to a MinIMU-9 v5 or AltIMU-10 v5 (or older versions of those boards) to function as an attitude and heading reference system, calculating estimated roll, pitch, and yaw angles from sensor readings that can be visualized with a 3D test program on a PC. It is based on the work of Jordi Munoz, William Premerlani, Jose Julio, and Doug Weibel.

minimu9-ahrs software for Raspberry Pi
This is a program for reading sensor data from Pololu IMU boards over I²C. It was written for and tested on the Raspberry Pi, but it will probably also work on similar embedded Linux boards that support I²C.
Pololu_Open_IMU by mikeshub
This customer-submitted Arduino program (sketch) is similar to our MinIMU-9 + Arduino AHRS except it uses the Madgwick algorithm. It outputs pitch, yaw, and roll angles.
Orientation sensing with the Raspberry Pi and MinIMU-9 v2
This project explains how to connect our MinIMU-9 v2 (or AltIMU-10) sensor board to a Raspberry Pi and use it to sense orientation. It includes a video, wiring instructions, and code.
Using the L3GD20 gyroscope in control systems
This is a YouTube playlist by control systems lecturer Brian Douglas that uses the L3GD20 MEMS gyroscope. It describes the fundamentals of the gyro and how to use it for closed and open loop control projects with MATLAB/Simulink and Arduino.
ascii_graph by drewtm
This sketch outputs a text-based graph of LSM303 accelerometer and L3G gyro data, providing a quick way to check whether the sensors are working as expected.
MinIMU-9 v2 connected to 3ds Max in real time
A MinIMU-9 v2 is connected to an Arduino Uno to interact in real time with 3ds Max. This 3ds Max MinIMU-9 tutorial (5MB zip) includes source code, 3ds Max files, and step-by-step instructions. By Nippur, August 2012.
RTIMULib IMU library for embedded Linux systems
RTIMULib is a library for embedded Linux systems designed to make it easy to interface with an IMU and get Kalman-filtered orientation estimates. It works with our MinIMU-9 v3, AltIMU-10 v3, and AltIMU-10 v4 (as well as the older MinIMU-9 v2 and AltIMU-10), and it includes two demo programs that aid in testing and calibrating the sensors. Instructions are provided for setting up RTIMULib on a Raspberry Pi.