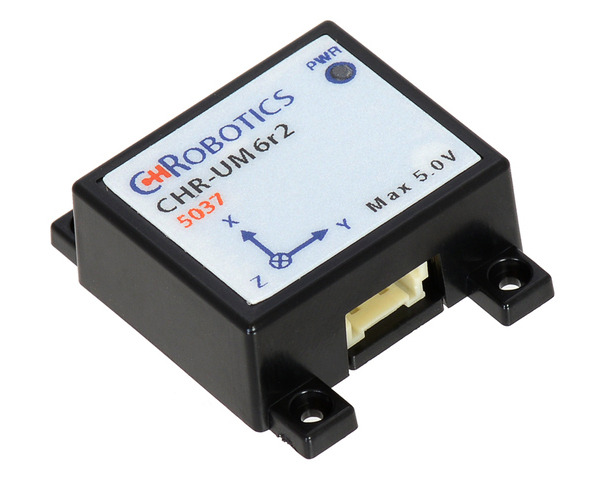 The UM6 r2 ultra-miniature orientation sensor from CH Robotics uses rate gyros, accelerometers, magnetic sensors, and an onboard 32-bit ARM Cortex processor to compute sensor orientation 500 times per second. Sensor orientation is reported using either quaternions or Euler angles over a TTL serial interface at user-customizable rates. The UM6 was designed specifically to be easy to use—an external enclosure protects sensitive electronics, and connectors make it easy to interface with the sensor without making solder connections to the sensor itself.

Note: CH Robotics has discontinued the UM6 r2 and replaced it with the newer and higher-performance UM7 orientation sensor.

The UM6 r2 ultra-miniature orientation sensor—also known as an Attitude and Heading Reference System, or AHRS—from CH Robotics is much more than an IMU. It uses rate gyros, accelerometers, magnetic sensors, and an onboard 32-bit ARM Cortex processor to estimate the absolute sensor orientation 500 times per second. Sensor orientation is reported using either quaternions or Euler angles over a TTL serial interface at user-customizable rates. A USB-to-serial adapter can be used to connect the IMU to a computer running the free CH Robotics Serial Interface PC application, which allows for easy data visualization, board calibration, and UM6 settings configuration.

The UM6 was designed specifically to be simple to use: an external enclosure protects sensitive electronics, its small size (1.1″ × 1.4″ × 0.5″) makes it easier to fit into the end system, and connectors mean no soldering to the sensor itself is required. A polarized four-pin male connector on the side of the UM6 matches an included 7.5″ cable and provides the lines necessary to power the board and use the main TTL serial interface. Two 12-pin female connectors on the underside of the UM6 provide access to these same pins along with additional, unused Cortex pins and allow the sensor to be plugged directly into a host system, removing the need to run wires to enable the sensor to communicate.

The UM6 can be configured to automatically transmit raw sensor data, processed sensor data, and angle estimates at user configurable rates ranging from 20 Hz to 300 Hz in roughly 1 Hz increments. Alternatively, the UM6 can operate in “silent mode,” where data is transmitted only when specific requests are received over the UART. Regardless of the transmission mode and rate, internal angle estimates are updated at 500 Hz to improve accuracy.

The UM6 comes factory-calibrated to remove soft and hard iron distortions present in the enclosure. When integrated into the end-user system, additional calibration may be necessary to correct other magnetic field distortions. Magnetometer calibration can be performed using the CH Robotics Serial Interface software.

The UM6 r2 has the ability to interface with an external GPS module to provide position, altitude, speed, and course outputs. Any GPS module that communicates using industry-standard NMEA sentences, such as our LS20031 GPS receiver module, can be used with the UM6.

The CHR-UM6r2 is a drop-in replacement for the original CHR-UM6. The UM6 r2 uses a different firmware version to support some internal hardware changes, but it is functionally identical to the original.

We carry several inertial measurement and orientation sensors. The table below compares their capabilities:

The CHR-UM6r2 can be used in applications where a compact attitude and heading reference system is needed: