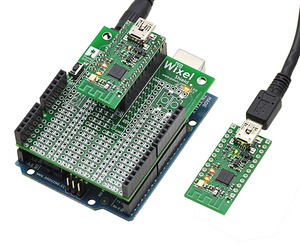 2.a. What You Will Need
2.b. Assembly
2.c. Configuring the Wixels
2.d. Connecting the Shield
2.e. Using the Arduino Software
2.f. Writing Sketches for the Wixel Shield

3. Differences between board revisions

The Wixel shield seamlessly enables a wireless link (with a typical range of ~50 feet) to replace your Arduino’s USB interface, which means you can use the standard Arduino computer software to:

Advanced users can write programs for their Wixels to make use of its 12 free general-purpose I/O lines, including 5 analog inputs, or to develop more complex wireless communication networks.

Thank you for your interest in the Wixel Shield for Arduino. If you need technical support for this product or have any feedback you would like to share, you can contact us directly or post on our forum. We would also be delighted to hear from you about any of your projects and about your experience with the Wixel shield. Tell us what we did well, what we could improve, what you would like to see in the future, or anything else you would like to say!

The Wixel shield makes general-purpose wireless serial communication easy. Arduino serial functions, such as Serial.print(), will transmit data wirelessly from the shield’s Wixel to a remote Wixel that then relays the information to the computer or embedded electronics to which it is connected. Similarly, data from the remote Wixel will be transmitted to the Wixel shield and can be read by Arduino functions like Serial.read(). This enables wireless sketch debugging using the Arduino serial monitor, wireless communication between custom PC software and your Arduino, wireless communication between multiple Arduinos, and more.

The unused portions of the Wixel shield are configured as general-purpose prototyping space in which you can construct your own circuits. The holes in this prototyping area are connected in a breadboard-like configuration, as indicated by the top silkscreen. The traces connecting the prototyping holes are located on the bottom side of the shield and can be cut if a particular connection is not desired.

The shield has two general-purpose MOSFET circuits that can be accessed by the upper “HV” and “LV” pins (pictured above) located between the Wixel socket pins. These circuits can be used as inverters, level-shifters (e.g. to convert a 3.3 V Wixel output to a 5 V signal), or for driving larger loads (up to 200 mA) than you can with a Wixel or Arduino I/O pin alone (e.g. high-current LEDs or relays). The MOSFET circuits are not connected to anything by default. The circuit incorporates a BSS138 MOSFET (N-channel, 50 V, 200 mA, 1.5 V maximum gate threshold voltage).

The shield has space near the pin 13 LED that can be used for two general-purpose pushbuttons. The pushbutton pins are brought out to a series of through-hole pads that you can connect to other parts of your circuit. One easy way to add user-input pushbuttons to your Arduino is to jumper the upper pushbutton pin to the neighboring ground pad and connect the lower pushbutton pin to the Arduino or Wixel I/O line of your choosing (with that line’s internal pull-up enabled). In this configuration, the line is high by default, and it is driven low when the button is pressed.

The shield relies upon a pair of Wixels for its wireless connection. The shield’s Wixel socket allows the Wixel to be removed and used for other applications.

Note: The above features make the Wixel shield a good general-purpose prototyping board for Wixel projects. An Arduino is not required to use this board as a Wixel development platform.

The Wixel shield connects to these pins on the Arduino:

The shield uses the Arduino’s 5 V regulator to power the socketed Wixel. It is safe to use this shield in conjunction with other Arduino shields or electronics that also use these pins, though such electronics could potentially interfere with the operation of the Wixel shield (and vice versa). For details about the connections, see the Wixel shield for Arduino schematic in Section 1.e.

As shown in the picture below, the Wixel Shield has a number of surface-mount jumpers that can be used to customize some of the on-board connections.

The shield board dimensions are 2.02″ × 2.56″ (within the profile of the standard Arduinos). When the shield—with a socketed Wixel—is plugged into an Arduino Uno, the entire assembly is 1.3″ tall.

With the socketed Wixel but without the extended shield headers, the shield itself is 0.8″ tall. Since the height of the Wixel and its socket is taller than the typical available clearance between shields, we recommend using the Wixel shield as your Arduino’s top shield.

The following materials are necessary for getting started with your Wixel shield for Arduino:

We offer a combination deal that consists of a Wixel shield, two Wixels, and a USB A to mini-B cable.

The left picture below shows a fully-assembled Wixel shield, and the right picture below shows that assembled shield being used with a Wixel and an Arduino Uno. Note that the header pins should be soldered into the outer rows of through-holes as shown in the pictures below; the inner rows provide additional access to the Arduino and Wixel pins.

If none of your Wixels has header pins soldered in, you will need to assemble at least one Wixel with the included male headers as shown in the picture below:

Once the male header pins are installed, the Wixel can be plugged into the female socket on the Wixel shield. You can skip this step if you purchased a fully-assembled version of the Wixel.

The quickest way to get started with your Wixel shield is to load both Wixels with our open-source Wixel Shield app (25k wxl). This special version of the Wireless Serial app, which is documented in the Wixel User’s Guide, creates a wireless serial link between two Wixels and enables wireless Arduino sketch uploading (using the standard Arduino computer software) in addition to general-purpose wireless communication.

The app has two configuration parameters: radio_channel and baud_rate. Both Wixels need to use the same radio_channel, and the baud_rate needs to be set to the specific upload speed/bootloader baud rate for your Arduino, as shown in the table below. (Other baud rates will work for serial communication, but they will not work for wireless Arduino programming.)

Making Your Own Compatible Apps

Compatible apps, at a minimum, must do two things: relay serial communication and reset the Arduino when the Arduino software signals a reset. To accomplish this, they should use the following three Wixel pins:

The other 12 general-purpose I/O pins including 5 analog inputs are free to be used by your app to interface with the Arduino or other electronics.

A good starting point for making your own compatible app is to modify the source code for the Wireless Serial App, which is available in the Wixel SDK and included as part of the Wixel Development Bundle. The Wixel User’s Guide has more information on making your own Wixel apps in Section 10.

As with most electronics, it is good to avoid making connections while circuits are energized. Therefore, we recommend that your Arduino be unpowered and disconnected from USB when plugging or unplugging the shield from it. The same goes for the socketed Wixel. After all of the connections between the Wixel, shield, and Arduino are secure, the Arduino can safely be powered through the power jack or USB. It is safe to connect the socketed Wixel to your computer through USB, but the Arduino will not receive power through that connection.

Using the Arduino software with the Wixel shield for Arduino is not any different than using it normally, except that you will be programming on the COM port associated with a Wixel rather than one associated with your Arduino. In the Arduino IDE, select your Arduino board using Tools->Board and select the the COM port that corresponds to the Wixel connected to your computer using Tools->Serial Port. The upload button and the serial monitor will now work exactly like they do when your Arduino is directly connected to your computer via USB.

Writing sketches for the Wixel shield is as easy as using the standard serial library to transmit and receive serial data. Note that when first enabling the serial port, you might receive an invalid serial byte as a result of noise on the serial lines. You can keep the Wixel from receiving this noise byte by delaying for ten milliseconds before and after calling Serial.begin(), like this:

Here is a sketch (based off of the example physical pixel sketch) that demonstrates wireless serial communication between an Arduino and a computer:

3. Differences between board revisions

There have been two versions of the Wixel Shield for Arduino, the original (v1.0) and the current v1.1. While either version should generally be a drop-in replacement for the other, there are some minor differences between the two versions.

This version predated the Arduino Uno R3, so it lacked pass-throughs for the four new pins present on the R3 and all newer Arduinos.

Compared to v1.0, the following changes were made: