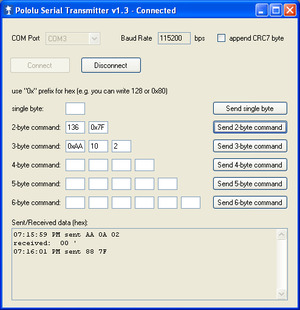 This is a simple serial transmitter utility for Windows that lets you transmit sequences of bytes to a selectable COM port. The most recent version allows you to specify the baud rate, and it reports back any serial data it receives while you are connected. This program can be used to send commands to our serially controllable devices, which can help you troubleshoot problems by letting you determine if the fault lies with your serial code or with the device itself. To install the program, download and unzip the following archive:

and open the file setup.exe. The installed program will appear in your Start menu as Pololu Serial Transmitter under the Pololu category.

You can send a single byte at a time using the Send single byte button, or you can send entire packets up to six bytes in length. Simply enter the values of the bytes you wish to transmit in the text boxes. These values are interpreted as decimal (base-10) integers unless they are preceded by the 0x prefex, in which case they are interpreted as hexidecimal (base-16) integers. For example, to send a byte that has a value of 128, you can either type 128 or 0x80. The log at the bottom of the window keeps a record of the packets that have been sent and received. This log displays each sent byte as a two-digit hex number and each received byte as a two-digit hex number followed by its ASCII character representation surrounded by single quotes. Note that some bytes (e.g. 0) represent special ASCII characters that don’t display well.

The following screen capture shows what happens if you use the serial transmitter utility to send the command byte 0x81 (“Get Signature”) to the TReX Jr motor controller: