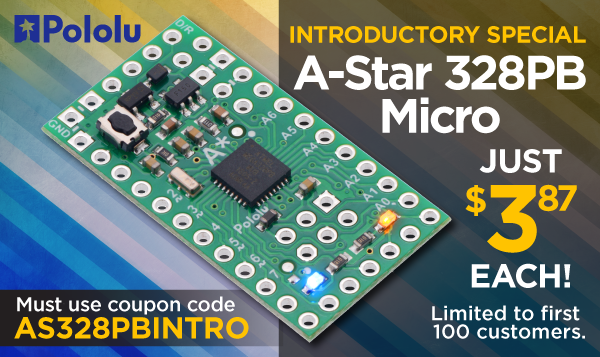 Today we are releasing our newest A-Star programmable controller, the A-Star 328PB Micro. It is basically our version of the ubiquitous Arduino Pro Mini type products, but with the newer ATmega328PB microcontroller. The board itself is pretty straightforward (though the updated AVR is exciting), so the main thing I want to share in this post is our history with the Atmel ATmega328PB microcontrollers (this was before Microchip acquired Atmel) and how this product would not have existed without our lower-cost manufacturing initiative that I have been discussing.

We have been using the ATmega8, and then the ATmega48, ATmega168, and ATmega328P, since 2004 in many of our user-programmable products because of their versatility and excellent free compiler support (which also made Arduino possible). We first heard about the ATmega328PB in early 2014. The product kept being delayed, and I did not get a quote for them until October 2015. I ordered a reel right away; it arrived in March 2016. Over those two years, we put our AVR-related efforts into the ATmega32U4, releasing several A-Star 32U4 programmable controllers and using it on robots like the Zumo 32U4. The ATmega32U4 was a superior part with native USB and more I/O lines, making it a better fit for many of our applications. By the time we finally got the ATmega328PB parts, we had the A-Star 32U4 Micro available for just $12.75, making it less exciting to put effort into a lower-performance product that might end up costing almost the same amount.

The new manufacturing equipment I ordered in the fall of 2017, along with the availability of our latest AVR programmer, brought attention back to the feasibility of a basic ATmega328PB carrier. I was hesitant to put effort into a product where we could not offer something substantially more compelling than what was already available. Despite the ATmega328PB being out in the wild for almost two years, it still had not really made it into many Arduino products, so I thought that perhaps we could offer something there. But more importantly, I wanted to see how low we could price it. I was aware of Arduino Pro Mini clones available on eBay and the AliExpress-type sites for under $3. Most official Arduino Pro Mini type products cost more like $10. For this project to be worthwhile, I wanted to get under $5.

It turns out we had to squeeze quite a bit just to get to the upper limit of that “under $5” goal, and so we are releasing this product at a unit retail price of $4.95. It’s not the under-$3 you can find for the absolute cheapest clones, but if you get the A-Star 328PB Micro from us, you are getting a well-supported, well-made product (each unit is 100% automatically visually inspected and 100% functionally tested) and supporting a company that is doing more than just copying products that are already out there.

It is my hope that by being able to offer the A-Star 328PB Micro for under $5, we are offering something meaningful, giving you a new option for general-purpose controllers at the price of a cheap lunch. I am interested to hear what you think. Is the 328PB interesting when you can get USB for not much more? Is the price low enough for you to buy from us instead of getting it from China?

We are offering the A-Star 328PB Micro in four voltage and frequency combinations:

The A-Star 328PB Micro provides access to all 24 I/O lines of the microcontroller and ships with an Arduino-compatible serial bootloader; you can also use an AVR in-system programmer (ISP) for access to the entire chip. We recommend our USB AVR Programmer v2, which supports both programming interfaces and can be configured to run at either 3.3 V or 5 V.

Last but not least, we are continuing our plan of offering new products at the highest quantity price break at single unit quantities as an introductory celebration. That means that for the first 100 customers, you can get an A-Star 328PB Micro for just $3.87! (Must use coupon code AS328PBINTRO; click to add the coupon code to your cart.)

While we assemble (and design and document and ship and support) the boards here in Las Vegas, we still get the bare PC boards from China, where they are currently on holiday celebrating Chinese New Year. That is constraining how many units we can make at the moment, so we are limiting shipments to 5 units per customer. However, the introductory coupon has no quantity limit, and you can order more than five at that price if you would like. Backordered units are likely to ship within a few weeks.

Brad H.
15 Apr 2018
This comment is no longer visible to everyone because it was deleted.

Kevin
17 Apr 2018
This comment is no longer visible to everyone because it was deleted.

Brad H.
17 Apr 2018
This comment is no longer visible to everyone because it was deleted.

Karl D.
18 Feb 2021
This comment is no longer visible to everyone because it was deleted.

Brandon
18 Feb 2021
This comment is no longer visible to everyone because it was deleted.

Karl D.
19 Feb 2021
This comment is no longer visible to everyone because it was deleted.