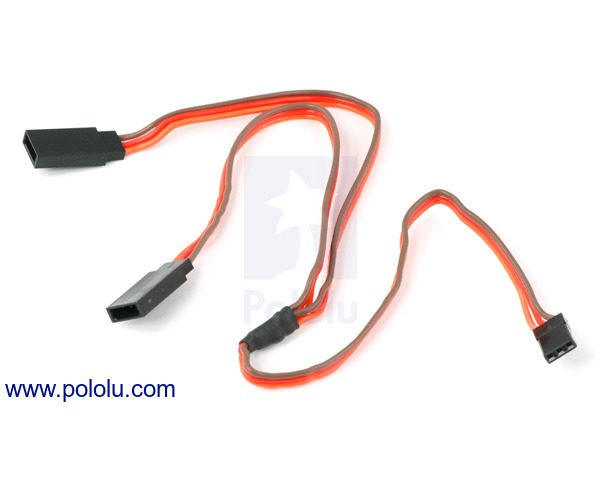 This 12-inch (300-mm), flat Y-cable is typically used to connect two servos to a single servo port . It has 22-AWG wires terminated on one end by a “JR”-style female connector and on the other by two “JR”-style male connectors. The split occurs near the cable’s midpoint, so the two male ends can be separated by up to approximately 12".

This 12" (300 mm) Y-cable is typically used to connect two servos to a single servo port on an RC receiver or servo controller. It has a single female JR connector connected to two male JR connectors, which means it is compatible with almost all of the RC servos we sell (you can assume our servos have female JR connectors unless the servo’s product page specifically says otherwise). The connectors have gold-flashed contacts on a 0.1" spacing, and the cable is flat with 22-AWG wires.

The split occurs near the midpoint of the cable, so the two male ends can be separated by up to approximately 12".