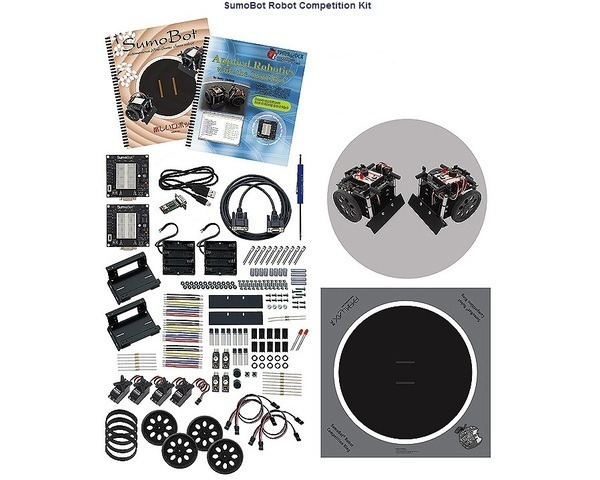 If you think one robot is interesting, wait until you see two of them battling for control, Sumo-style. The SumoBot Robot Competition Kit is an educational kit that includes two texts and parts to make two competition-ready robots that comply with the Northwest Robot Mini-Sumo Tournament rules, the standard for many mini-sumo competitions. These little pushers will locate and knock their opponents right out of the ring while detecting the edge of the ring should an escape move be necessary.

This kit comes with all the parts you need to build and program two high-quality SumoBot Robots designed to wrestle in the mini-sumo competition ring (included in the kit!). The electronics consists of a built-in surface-mounted BASIC Stamp 2 module and an array of infrared sensors to detect your opponent and the edge of the Sumo Ring. Additional components include piezospeakers, resistors, pushbuttons and LEDs to build custom breadboard circuits for program mode selection and sensor state feedback. The hardware package includes black anodized aluminum chassis and scoops, servo motors, wheels, 4AA power packs (batteries not included), mounting standoffs, and screws for two complete SumoBot robots.

This SumoBot kit comes with two printed texts. The SumoBot Manual (1MB pdf) has assembly instructions and test programs that take you from basic moves to one-on-one combat. Once you have your SumoBot robots up and running, give them a competitive edge and expand your skills by following the step-by-step activities in Applied Robotics with the SumoBot (5MB pdf). Activities include friction analysis, self-calibrating sensors, memory optimization with multipurpose variables and a sensor flags register, and state-machine diagrams for sensor-based navigation. EEPROM data logging lets you record your robot’s sensor and program states during a match, then display them afterward in the BASIC Stamp Editor Debug Terminal — an excellent way to troubleshoot and analyze the performance of your program strategies.

Hold your wrestling matches on the durable 36" x 36" SumoBot robot competition ring poster, designed to use with the instructions and programs included in the Applied Robotics with the SumoBot (5MB pdf) text.

Note: You will need to install the Basic Stamp editor software from Parallax’s website to write PBASIC programs for downloading to the BASIC Stamp.