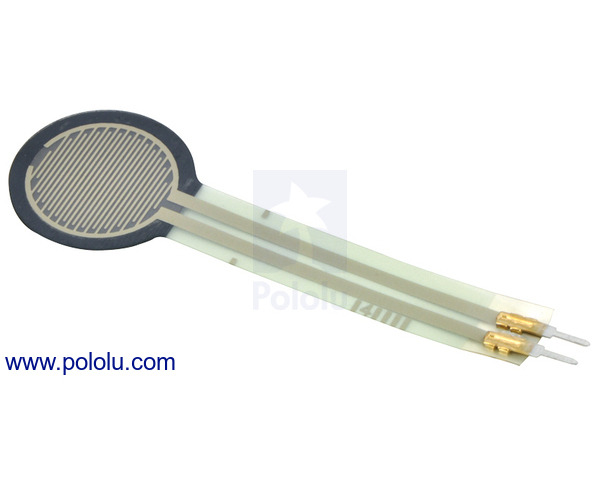 This force-sensing resistor (FSR) from Interlink Electronics is a passive component that exhibits a decrease in resistance when there is an increase in the force applied to the 0.58″-diameter (1.5 cm) active area, allowing you to create a sensor that is able to detect force or pressure. With a force sensitivity range of a few grams to a few kilograms, this sensor is optimized for use in human touch control applications.

The 0.72″-diameter circular pad is flexible, light (0.25 g), and extremely thin (0.02″), and it has a circular active sensing area with a diameter of 0.58″. It does not appreciably compress when pressure is applied. The FSR has a masked adhesive backing for easy mounting, and the 1.7″ flexible male leads give you a convenient way to integrate the part into your project. The two male pins (called “solder tabs”) have a 0.1″ spacing, which means they are compatible with most solderless breadboards and perfboards, though the solder tabs are too short to work well with many 0.1″ connectors. (A very similar FSR with a much shorter tail is also available; see the picture on the right for a side-by-side comparison of the two versions.)

Interlink refers to this product as part number FSR 402 in their FSR 400 series. We have seven versions of force-sensing resistors available, which lets you choose the one with the dimensions that best suit your application:

May 2014 update: We have changed the dimension in this product’s name from 0.5″ to 0.6″ so the name more accurately reflects the product. The product itself has not changed (the active area has always been much closer to 0.6″ than 0.5″). The old product name was Force-Sensing Resistor – 0.5" Circle.