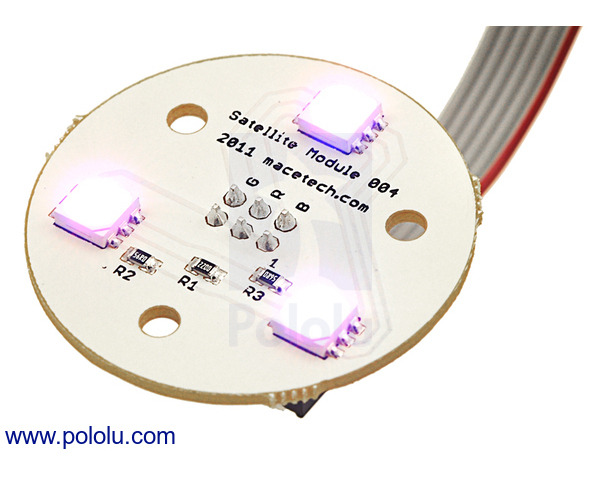 The Satellite Module 003 is an RGB LED round “pixel” with three bright surface-mount RGB LEDs. This LED module is designed to be used with the OctoBrite DEFILIPPI to easily integrate full-color LED lighting into your next project.

The 003 and 004 satellite modules from Macetech have three bright surface-mount RGB LEDs. You can use a string of satellite modules to create custom lighting projects, such as for holiday decorations or art displays.

These satellite modules are designed for use with the OctoBrite DEFILIPPI and a 12 V power supply. An OctoBrite can control the individual color and brightness of up to 8 satellites in response to commands from a controller such as an Arduino or Maestro. Satellite modules can be easily connected to the OctoBrite using a 6-conductor ribbon cable with 2×3 IDC connectors.

Note that though the satellite modules are designed for use with the OctoBrite, you can also use them with ShiftBars (one module per ShiftBar), or you can power the red, green, and blue LEDs directly using a 9 – 11 V supply. The three RGB LEDs are connected in series (so all three LEDs will always have the same color), and a resistor on each channel limits its current to about 20 mA at 11 V. The LED channels have a common anode, which is connected to the unlabeled satellite module pins.

For a brighter RGB LED module in a similarly small package, consider the Satellite Module 001. For an RGB LED with a built-in driver, consider the ShiftBrite.