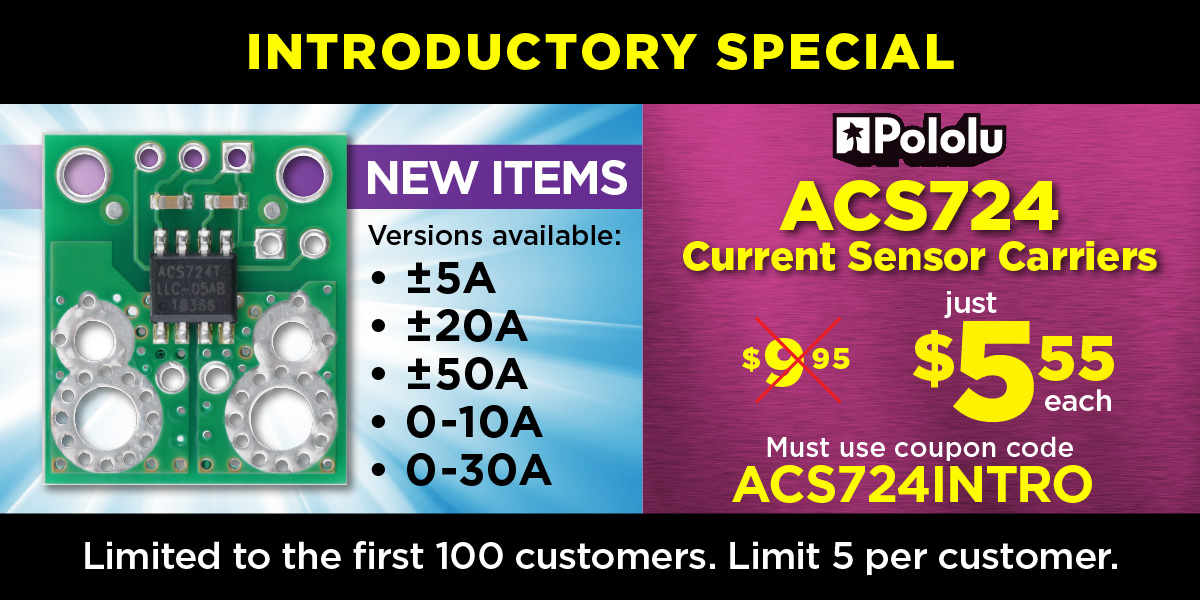 We now have new current sensors based on Allegro’s ACS724, the successor to the ACS714 that we have been using for many years. The ACS724 offers a number of exciting improvements over the ACS714, including more current range options (up to ±50 A!), over twice the sensitivity for the ±5 A version, a higher bandwidth for faster response times, and differential Hall sensing for substantially reduced interference from ambient magnetic fields. In quick tests, we saw a variation of around 1% of the full range just from changing the orientation of the ACS714 in space (because of the Earth’s magnetic field), while the ACS724 output stayed steady regardless of orientation. We also tried bringing a small magnet close to each sensor, and its effect on the output was many times smaller on the ACS724.

These bidirectional and unidirectional current sensors are a simple way to gain fundamental insight into the performance of your system. You can use them for closed-loop torque control of actuators, tracking power consumption over time, or even as inexpensive current probes for an oscilloscope. They output an analog voltage that varies linearly with the current passing through them, and because they use the Hall effect to measure the current, they offer full electrical isolation of the current path from the sensor’s electronics. This method of sensing means the sensor can be inserted anywhere into the current path, including on the high side, and because their current path resistance is on the order of 1 mΩ or less, they have minimal effect on the rest of the system.

Together with the Broadcom ACHS-712x current sensors we released last month, this brings our full current sensor lineup to thirteen sensors:

As usual, we are offering an extra introductory special discount on the ACS724 current sensor carriers, to help share in our celebration of releasing a new product. The first hundred customers to use coupon code ACS724INTRO can get up to five units for just $5.55 each!