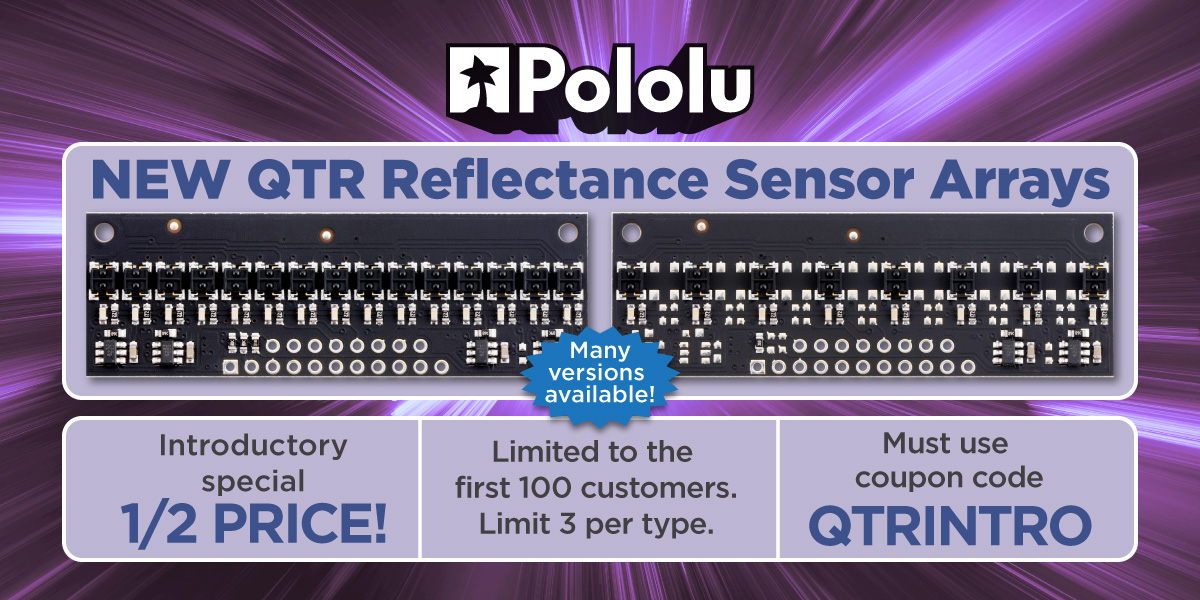 All the student engineering interns we had over the summer from out-of-town colleges are headed back to school, so I get to announce the release of products they worked on over the summer. The new QTR sensors we are releasing today include the 15-channel version laid out by seventeen-year-old Chris H.

You can see more about our new line of QTR reflectance sensor arrays in the first blog post I wrote about them a few weeks ago. One cool design and manufacturing aspect I did not mention then is that we designed these boards so that they could be populated at various densities. For example, that lets us make an 8-channel version with 8 mm sensor pitch on the same board that also works as a 15-channel array with 4 mm sensor pitch:

Here are some diagrams showing some of the thought that went into the soon-to-be released 31-channel version, which can also be populated to be an 8 mm pitch, 16-sensor array; a 12 mm pitch, 11-channel array; and a 20 mm pitch, 7-channel array:

With so many combinations of sensor types and output circuits, we won’t make every one of the possible arrangements a stock product, but the idea is that if you have an application where a particular sensor pitch is ideal for you, we can quickly make some for you without having to lay out new PCBs.

We expect eight channels on an 8 mm pitch to be a popular variant, so those will be stock products. We have also added the corresponding 4-channel version (using the same boards used for the full-density, 7-channel product), so this new product announcement covers twelve new stock sensor arrays:

Our introductory promotions are still going strong! Be one of the first 100 customers using coupon code QTRINTRO and snag any of these new sensors at half price! (Limit 3 per item per customer.)