New product: Stability Conversion Kit for Balboa (and some memories of my first robot)

I don’t blame you if you have no idea why the new Stability Conversion Kit for Balboa is so exciting. With a name like that, you probably couldn’t even guess what it is, let alone why it’s exciting. But let me keep you guessing while I share a little about the first robot I built, which is kind of a hint. It’s pure coincidence that I happened to get reunited with it just as we were preparing to release this new product I’m announcing here.

I know for sure that I built my first robot in eighth grade, for the science and engineering fair for which everyone in my school had to do a project, which means I must have started working on it in 1992 when I was twelve years old. The better projects in my school went on to the local, island-wide science fair in Hilo, and the better projects there went on to the state fair in Honolulu. (I was initially not among those chosen to go on from the Big Island, I think because of some judging process mistake, but my science teacher and probably others lobbied to get me there.) There was time between the different stages, so I kept working on it through the spring of 1993, which would now make it over 25 years old. I probably added the labels in later stages in response to some advice to better present what I made.

When Paul saw the robot for the first time in my office this morning, he immediately recognized a piece of it: “That looks like the gearbox from my first robot!” I was a bit skeptical, but he immediately backed it up by pulling out Gordon McComb’s Robot Builder’s Bonanza and showing me the project he had followed from the book. (In another amusing twist, it turns out that the copy of the book Paul had in his office is my old book, though I hadn’t gotten it until high school, and I didn’t realize until today that the gearbox in the book was the same one I had used.)

I’m pretty sure I got the gearbox from Edmund Scientific, because their printed catalogs and Radio Shack (nearest one in Kona, 40 miles away) were initially my only sources for anything electronics-related. The wheels were from some broken radio control toy. The ball caster was long a point of frustration. In earlier versions of the robot, I had tried more common swivel casters and then a ball caster I made from a ping pong ball in a toilet paper tube, but neither was very reliable. I was very happy to eventually find the metal ball caster that I used in the final version, which you can see here along with the three IR LED and phototransistor pairs used for detecting a two-inch white line on a black background:

That heavy, noisy caster was not ideal, but at least it didn’t jam at a bad angle like the swivel caster or collapse like my ping pong ball and cardboard creations. I am mentioning all these details because it was so much work just to put a basic chassis together, without even getting to the electronics part. The electronics are not something I want to cover in this blog post, but I should mention that I was very fortunate to find a mentor at the Canada-France-Hawaii Telescope headquarters right across the road from my school. CFHT had a nice electronics lab stocked with all kinds of components they just gave me and tools they let me use, and I got lots of help from John Horne when I was in 8th grade and then from many others there while I was in high school.

So, to bring this back to Pololu’s new product: the Stability Conversion Kit for Balboa is primarily a ball caster attachment for the Balboa chassis:

That might sound pretty basic, but using it fundamentally transforms the Balboa into a very different kind of robot. As a reminder, Balboa is a two-wheeled, balancing robot:

You can read more about the balancing robot in my blog post introducing the Balboa robot. It’s a very capable platform that we spent many years developing, but making a balancing robot is not easy, and it’s probably not the best type of robot to build as your first robot. We did not even release the chassis as a separate product independent of electronics because it would be difficult to do much with it. The new stability conversion kit completely changes that. With the ball caster, the chassis can be used as a much more beginner-friendly differential-drive mobile base with three points of contact with the ground:

We offer the ball caster attachment by itself, for those who want to use it with a complete Balboa 32U4 robot kit to immediately get up and running without developing their own electronics. We also now offer the Balboa Chassis with Stability Conversion Kit, which includes all the mechanical components for the chassis other than wheels and motors:

As with the original Balboa 32U4 kit that includes electronics, we deliberately do not include motors and wheels so that you can pick your own to customize the look and performance of your robot. This diagram shows the possible chassis angles with four different wheel sizes ranging from 60 mm through 90 mm:

For motors, we recommend our 30:1 HPCB, 50:1 HPCB, or 75:1 HPCB micro metal gearmotors with extended back shafts that can be used with encoders. Even if you do not plan on using encoders on your robot at first, it’s nice to have the option down the road.

And options are what our chassis kits are all about, whether you select our Zumo tracked chassis, Romi round chassis, or now the new Balboa chassis. One of my guiding principles in developing our robot platforms is that I want to help you, our customers, build your robot, not just the particular one we designed.

I realize there are many kids interested in robotics who are not as fortunate as I was to have Canada-France-Hawaii Telescope headquarters across the street from my middle school, and that for many of them (and their parents and teachers), all of the options we offer can be overwhelming. Over the next several years, we will be working on sensors and other modules specifically for the Balboa, along with combination bundles and tutorials that will make Balboa a platform that students can begin with as a basic first robot in middle school and keep expanding through higher levels of their education.

I’ll end this product introduction as I have all my product announcements this year, with an introductory special to encourage you to try the Balboa chassis out for yourself. Be among the first 100 customers to use coupon code BALBOACHASSIS (click to add the coupon code to your cart) and get 15% off on Balboa-related products (limit 4 per product). 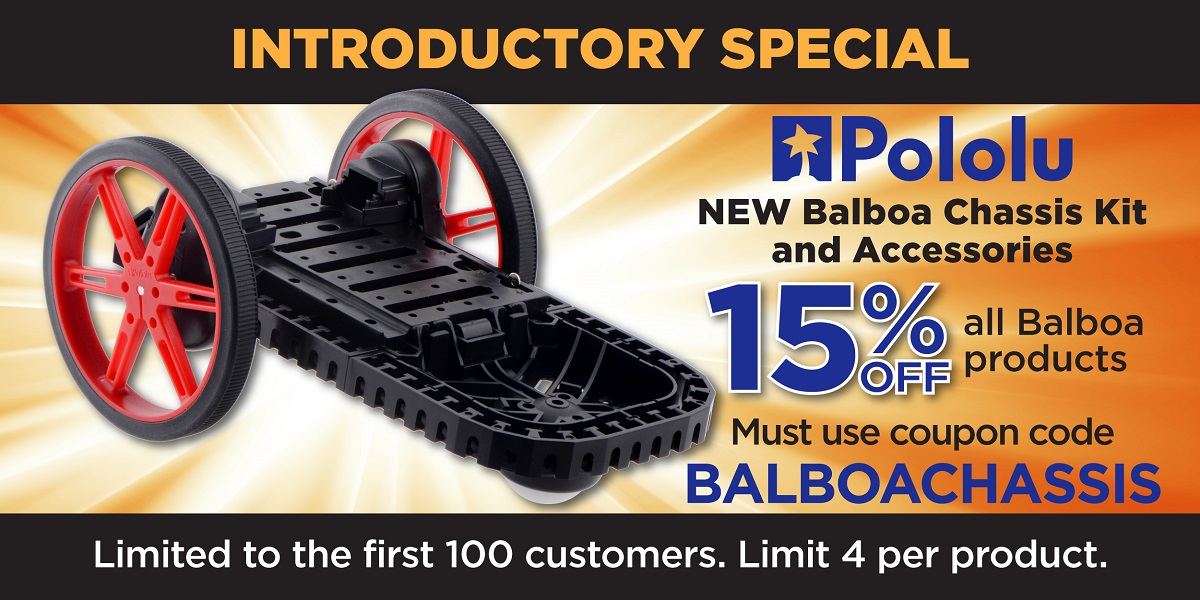